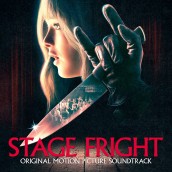 A slasher horror musical that will have your butcher knives dancing

Pulling off a musical satire, let alone one based around horror movies is fraught with a lot of unintentional peril, efforts that can go as unheard of as a bear relieving itself in the forest (does anyone remember Vincent D’Onofrio’s indie band slaughter DON’T GO IN THE WOODS?). But when it really works, as in the case of PHANTOM OF THE PARADISE and THE ROCKY HORROR PICTURE SHOW, the lyrics usually satirize the conventions of rock and roll as opposed to horror. While STAGE FRIGHT is punishably guilty of that sin, it’s scattershot satirizing of every other musical form from Broadway to classical makes this one of the more successful efforts in its delightfully peculiar genre, even if the movie itself might be pleasantly flawed.

Throw PHANTOM OF THE OPERA, PROM NIGHT, GLEE and TRICK OR TREAT into one big gay pot, and you’ll come up with a mostly ingenious, and gorily shocking satire that’s all over the place (mostly to its benefit) as the daughter of a murdered stage singer ends up reprising her mom’s role at a musical summer camp – with of course a masked killer doing his best to bring down the final curtain. The music and lyrics by Eli Batalion and Jerome Sable (who also wrote and directed) along with orchestrator Aram Mandossian are hilariously dead-on taking stabs at Andrew Lloyd Webber with their “stage” production of “The Haunting of the Opera,” nailing the composer’s floridly romantic ballads to a tea in a way that both Webber lovers, and haters will appreciate. It certainly helps when you’ve cast the movie PHANTOM star Minnie Driver to sing your ersatz tune in a bloodily memorable opening, with film daughter Allie MacDonald impressively carrying the vocal torch. And just like those Broadway by way of South Park fans Trey Parker and Matt Stone, Batalion and Sable snarkily know their targets, delightfully skewering Gilbert and Sullivan in “Where We Belong,” Rodger and Hammerstein as Meatloaf belts out “The Show Must Go On,” and invariably colliding multiple songs a la Sondheim in “Rehearsals” and even that great classical composer Franz with “Lizstomania.” The songs are so damn, hilariously good and tuneful that you wish there were far more of them, as opposed to the movie becoming a fairly unfunny by-the-book slasher by the end. While Sable’s comedic scoring is nicely thematic, his straight-up horror music also isn’t that particularly inspired as the body count piles up, with a show-stopping killer reveal that proves more energy draining than anything else. But given how many humorous notes that STAGE FRIGHT  hits on all counts, it’s a soundtrack and film at least deserving of the cult love that CANNIBAL: THE MUSICAL got.

But of all of STAGE FRIGHT‘s salutes, its most inspired just might be the rowdiest, as terrifically played heavy metal thrash becomes the Broadway-crashing voice of the Kabuki killer, whose theme song “Shut Your F***ing face screams it all for those driven homicidal by musical theater.

Click on the link to Purchase the STAGE FRIGHT soundtrack