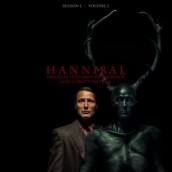 To label the sonic nightmare that Brian Reitzell has cooked up for television’s most lethally elegant doctor-gourmand as “music” is way to simple a way of defining the wildly experimental stew of sound design and occasional shards of melody that infuse a show that by rights shouldn’t be anywhere near network television, especially scoring that could lead to seizures in more tender viewers foolish enough to tune in. But the psychological incisiveness with which Reitzell conveys the sound of insanity is like nothing else that’s ever been done within the psycho-killer genre, be it on the big or small screens. Taking a cue from the truly terrifying, razor nail-on-blackboard vampire score he created for HANNIBAL producer-director David Slade on 30 DAYS OF NIGHT, Slade has gone for an experimental, constantly transforming sound collage of twisted metal, hammering percussion and unnerving ensemble playing – chilling sustains, come-from-nowhere percussion, swinging, hypnosis-inducing gestures and mutated brass the equivalent of being trapped inside a pitch-black hell of a psychopath’s mind.

Yet there’s a method to Reitzell’s madness, as HANNIBAL‘s impressionism is balanced with something resembling melody, mournful strings the cost of a profiler hero submerging himself in a dark parade of horrors, with Reitzell embodying the “killer of the week,” from the buzzing of bees to the playing of vocal chord violin strings, with the cannibal’s love of classical music similarly perverted amidst the morass. Reitzell’s been relentlessly scoring HANNIBAL over two seasons (with a third thankfully to come for us masochists), giving Lakeshore more than twenty hours of madness to create a four volume set that slices two seasons of “music” between them. Reitzell has done an exceptionally smart job of assembling the material, just allowing enough remotely conventional cuts among its elongated suites to serve as filler between the way more impressionistic stuff. With “Hannibal’s” first course offering a French set meal, Reitzell goes for a mocking jazz tone at its most inventive points. For “Hannibal’s” second, Japanese-themed meal, the composer noticeably scores in a Toru Takemitsu vein with cacophonic percussion, brass and piano amidst God knows what. They’re the savage contrast to lonely passages for piano and the Theremin, an electronic airwave instrument that’s been used many times to connote craziness, but never like this. Yet it’s absolute, eerie beauty that ends this collection with the chiming acoustical effects of “Bloodfest” for a second season climax so gory it’s amazing anyone will be sticking around for thirds besides the good doctor. It’s in this cue’s melodically rhythmic minimalism that Reitzell creates his most impressive serving of all, hearing one major character evisceration after another as a whispered, poetically elegant work of art. Ultimately for all of the horror he’s created, Reitzell knows he’s playing a character above his own carnage in his soundscape’s brilliant insanity – one well worth immersing oneself in for the four plus hours of hypnotically immersive goo and pure anti-matter music ingenuity.