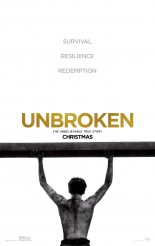 Respectful but not revelatory WWII biopic 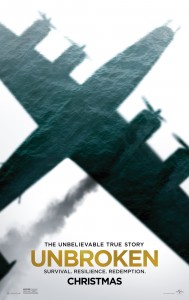 The late Louis “Louie” Zamperini, who passed away earlier this year, was an authentic American hero. After a bit of a wild youth, he buckled down and became an Olympic running champion in the ‘30s. During WWII, Zamperini (played as an adult by Jack O’Connell) was a bombardier aboard a U.S. war plane that was shot down over the Pacific. For forty-seven days, he and two crew mates (played here by Domhnall Gleeson, Finn Wittrock) were adrift in a pair of life rafts before being captured by the Japanese. Zamperini spent the next two years, until the war ended, in several Japanese prison camps, where he survived with courage and dignity despite severe conditions and treatment.

UNBROKEN, the film version of Laura Hillenbrand’s best-selling biography of Zamperini, depicts all this with admiration and clear respect for its subject. O’Connell conveys determination, grit, loyalty and watchfulness with little dialogue. What the actor doesn’t get a chance to do is show actual terror, doubt or any other sentiments that might make the portrait more human. It’s not that the screenplay by Joel Coen & Ethan Coen and Richard LaGravenese and William Nicholson makes Zamperini out to be fearless, but he’s never shown to have the least of unworthy sentiments. This may be absolutely accurate, but it makes for viewing that is more informative than empathetic.

Director Angelina Jolie maintains a steady pace and a sense of tension by keeping things quiet and proportionate (although the music score by Alexandre Desplat pushes hard at times); even histrionics are muted, with characters who are credibly blunted by hardship and resignation. The most psychologically interesting portrait here is that of Zamperini’s chief tormentor, Watanabe (Miyavi), at the prison camps, a man who is both fascinated and infuriated by his prisoner’s endurance. Watanabe’s envy is shown with more nuance than its target.

Jolie does work up some visual highlights, such as an overhead shot of the Allied prisoners all together in a river, which provides emotional punch. However, the understandable and even commendable desire to showcase Zamperini’s fortitude gets in the way of allowing us to look inside the man and understand how he found the wherewithal to survive. The result is the telling of a good story, but not an illuminating one.