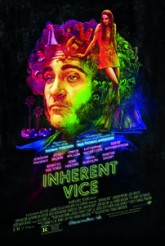 Although novelist Thomas Pynchon is a legendary American writer who has so far brought forth eight novels and numerous short stories (in addition to a lot of technical writing), INHERENT VICE is the first of his works to make it to the screen. As adapted by scenarist/director Paul Thomas Anderson, this comedic detective story, set mostly in coastal Southern California in 1970, has a real feel for the period and creates atmosphere to spare. It also has distinctive characters, albeit its view of women is so skewed that it might almost have been made in 1970. What it lacks is a sense of urgency, which is a real issue when the running time is 148 minutes.

Our hero is Larry “Doc” Sportello (Joaquin Phoenix), an ethical if almost permanently stoned private eye, still mourning the end of his relationship with the beautiful Shasta (Katherine Waterston). Out of the blue, Shasta appears, tearfully needing Doc’s help. Seems she’s involved with a very rich real estate developer (Eric Roberts) who has some in his inner circle plotting against him.

Doc, carrying the torch for Shasta, agrees to look into it – and finds a conspiracy so tangled and far-reaching that Keyser Soze might be afraid to try to figure it out. Fortunately for getting to the bottom of things, Doc is diligent, inquisitive and too high to have his feathers easily ruffled and fortunately for the audience, Doc’s friend (Joanna Newsom) narrates what’s happening so that we’re never too lost.

INHERENT VICE is a comedy that finds its humor partly in reminding us of some of the crazy excesses of its period, partly in the quirks of its main characters and partly in a kind of warm melancholy that shows us the honest good intentions of the day. We like Doc and Josh Brolin as his nemesis/ally, a narcissistic cop nicknamed “Bigfoot,” plays this arrogant avatar of “normal” society with the right mixture of brio and self-pity. Owen Wilson is cast perfectly as a man caught up in the midst of the mess, Reese Witherspoon seems to be having fun as an icy district attorney with a secret thing for hippies and Martin Donovan has a memorable scene as one of Doc’s clients.

Director-writer Anderson has clear knowledge of the period and wants us to be immersed in it, going so far as to make shots grainy, as if INHERENT VICE were actually made in its era. It feels a little like some of the indie detective movies of its day, but there’s a bit of distance here that doesn’t serve the film. The plot is never gripping and the style of humor becomes repetitive. Nearly all of the segments work, but the cumulative effect is that there’s too much material stretched over too long a running time. We run out of patience before Doc does.

We’re impressed with the evocation of times gone by and with Anderson’s ability to adapt Pynchon’s dense prose for the screen. Angeleno viewers may be made especially nostalgic. The mystery and the sentiments make us bemused, but at two-and-a-half hours, we need more connection to what we’re watching, to feel like participants rather than tourists.