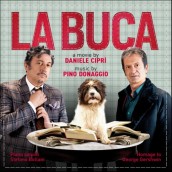 Fans of Pino Donaggio can only visualize Brian De Palma’s frequent suspense music consigliore holding up a butcher knife composed of lush orchestrations for such scores as CARRIE, BLOW OUT and BODY DOUBLE given his work that hits stateside. Undoubtedly, they’ll get a big musical shock if they hear how he’s equally adept at handling the styles of George Gershwin and Stephan Grappelli with the finesse he usually gives to Bernard Herrmann. The latter two are the jazzy partners in musical crime for this Italian comedy that finds a shady lawyer using hook and crook to reverse the record of a just-released, decades-long prison inmate. But the real revelation of LA BUCA is just how equally beautiful Donaggio can be given a far lighter tone. While his telltale, romantically heavy use of strings definitely tips us off to the composer’s far more dangerous identity, he’s effortlessly able to switch to a rhapsody in blue, tango’ing about with a strumming Gypsy guitar. You’d swear this was the score for a wildly romantic adventure in 40s-era Havana by way of black and white Manhattan if you didn’t know better.

But that’s just art of this wonderful score’s diversions that Donaggio can so beautifully evoke jazz vastness and intimate pathos in this odd couple’s not-so legal travails. Especially impressive here is Donaggio’s use of piano and brass melodies, turning his obvious love of Gershwin and that sparkling era to his own voice. Working as both modern, sophisticated comedy scoring and a gorgeously nostalgic album, LA BUCA is an homage so good that you might not even care if Donaggio ever picked up a knife or power drill again.

Click on the link to Purchase the LA BUCA soundtrack