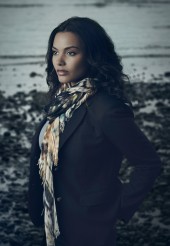 The actress talks about the shortlived CW series CULT 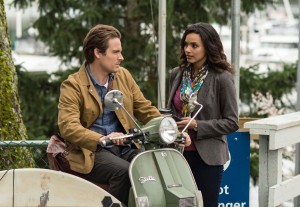 In Fox’s GRACEPOINT, which has its first-season finale tonight, Thursday December 11 at 9 PM, the small California coastal town has been all but ripped apart by the murder of young Danny Solano. As in BROADCHURCH, the U.K. series that is GRACEPOINT’s source material, an out of town reporter is one of those most responsible for stirring things up, to the point where one local commits suicide due to a campaign of harassment in the press. Here, the reckless journalist is called Renee Fleming. She’s played by Jessica Lucas, who was also one of the leads in last season’s CULT and starred in the recent remake of EVIL DEAD.

Lucas, originally from Vancouver, Canada, is at a party that Fox throws for the Television Critics Association, where she talks about her GRACEPOINT gig – including what it has in common with EVIL DEAD.

AX: You’re playing a journalist, and right now, in real life, you’re at a press event full of journalists. Does doing stuff like this help you with your character?

JESSICA LUCAS: Oh, yes. People have asked me if I’ve been doing research for Renee. I feel like I interact with journalists enough in my career that I can get a sense of what that job entails and what that’s like. It was a lot more about who she was as a person and how her character traits drive her to make the decisions she does than it was about really researching that aspect of it.

AX: Have you seen BROADCHURCH?

LUCAS: I watched the first two episodes, but then, after that, no. I didn’t watch any more. I didn’t want to copy what the other actress was doing.

AX: In BROADCHURCH, the journalist starts off very cynical and then has sort of an epiphany.

LUCAS: Yeah. I don’t know that I wanted to play it that way. I didn’t want to make her very apologetic. I think she comes into this scenario with a very specific agenda and she’s very passionate and driven and she follows the story and she tells the truth no matter what. And so some of the storytelling that she does, although it leads to terrible things unfolding, I don’t believe she’s sorry for it – she feels bad, but she was being a journalist on a story, and that’s where it lies.

AX: David Tennant is one of the leads in GRACEPOINT, recreating his original BROADCHURCH character. Most people know him from DOCTOR WHO. Were you a DOCTOR WHO fan?

LUCAS: Actually, no, I wasn’t. I haven’t seen a single episode of it. I knew David from HARRY POTTER, of all things. I’m familiar with his stage work a little bit – I know his Hamlet is considered one of the greatest Hamlets of all time. But a lot of people in Canada – whenever I was in Canada, people in Canada were like, who’s my favorite Doctor Who? So I need to get on this bandwagon.

AX: One of Renee’s more disastrous interactions is with Nick Nolte’s character. How was working with him?

LUCAS: He was someone I was very intimidated by. And I didn’t really know what to expect. He’s been around for so long and I think he’s just so comfortable in front of the camera. He’s an interesting human being off-camera, but the minute those cameras turn on, he’s like in the zone, he’s just there. It’s pretty incredible to watch him.

AX: It seems like playing the scenes are not too far from what it would be like dealing with somebody who you wan him to trust you, but you just have to be very careful …

AX: Were you happy with the way CULT wrapped up at the end of its one-season series?

LUCAS: No, not necessarily. I mean, that show was never supposed to be just a thirteen-episode show. It opened up a ton of questions in the first season and you never get to find out what happened. No, of course I wasn’t. But this is the nature of it and I don’t do things for results, I do things for experience. I really wanted to stay in that role and I really wanted to stay involved in that world and I can’t control whether people see it or how it went. I would have liked to do more of it – it just obviously didn’t turn out that way.

AX: And were you happy with the reception that EVIL DEAD received? I liked it that your character was recovering from addiction, so when she saw something, he friends all thought it was just withdrawal …

LUCAS: Oh, yeah. That was a good reason to keep her at the cabin. Because otherwise, it’s like, “Why are they staying at this place that’s haunted and weird and their friend is freaking out?” But the drug storyline gave it credibility, I think.

It’s funny, because this is a remake and a re-imagining as well, and it’s funny to hear some of the criticisms happening around GRACEPOINT right now, because I felt a very similar thing with EVIL DEAD. People were like, “Why did you remake it? I loved the original so much.” And then people were pleasantly surprised, and people are very supportive of it, so that was a really good feeling.

I liken it to theatre, in that just because it’s the same source material doesn’t mean it’s going to be the exact same thing. If you play it with different actors and different producers and different writers on a familiar concept, you’re going to get a different result. We’ve always been watching plays, and you can have a very different experience watching BOOK OF MORMON in New York and watching BOOK OF MORMON in L.A. and I don’t have pause. If it’s great material, I want to be part of it. You’re not going to turn down Hamlet – Hamlet is one of the greatest roles of all time. Just because other people have done it before you doesn’t mean you turn it down.

AX: Anything else you’d like to say about GRACEPOINT?

LUCAS: I just want people to give it a chance. It’s a compelling murder mystery with great actors and great characters.