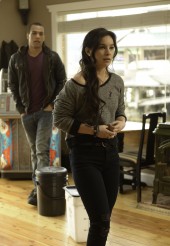 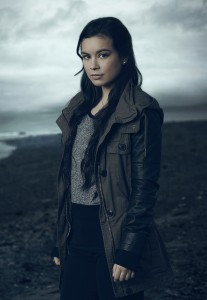 In Fox’s GRACEPOINT, which has its finale Thursday, December 11 at 9 PM, young Danny Solano has been murdered in the small coastal town of the title. David Tennant and Anna Gunn play, respectively, police detective Emmett Carver and police detective Ellie Miller, who are trying to find the killer. The miniseries is based on the British drama BROADCHURCH, which also starred Tennant.

Madalyn Horcher plays the dead boy’s adolescent older sister Chloe Solano; her distraught parents are portrayed by Michael Pena and Virginia Kull. Kendrick Sampson plays Chloe’s adult boyfriend Dean Iverson, whose dealing in drugs may or may not have factored into Danny’s death.

Sampson, who had an arc on THE VAMPIRE DIARIES as Jesse, and Horcher are hanging out together at a party that Fox is throwing for its talent and the Television Critics Association. Both actors sound very happy and for the most part in agreement as they talk about their work on the intense GRACEPOINT.

ASSIGNMENT X: Were either of you familiar with BROADCHURCH before you got involved in GRACEPOINT?

KENDRICK SAMPSON: We both watched it. I watched it literally in a day.

MADALYN HORCHER: Me as well. I love the show.

AX: Did either of you take away anything from that regarding the characters that are parallels to the ones you play here, or did you just kind of throw it out?

SAMPSON: Completely threw it out.

HORCHER: We wanted to really make our characters our own, because we really wanted to transform it, to take it away from BROADCHURCH and really make it just GRACEPOINT.

SAMPSON: And we were encouraged to do so by the executives and the [pilot] director [James Strong]. He wanted us to make sure that we brought a completely different interpretation. Actually, for the ones [in the cast] who didn’t see BROADCHURCH yet, he encouraged us not to until the end, so that we brought a very unique point of view.

AX: Given that David Tennant is the lead, were either of you DOCTOR WHO fans?

HORCHER: I am a huge fan of David Tennant. Honestly, off-set, he’s probably the nicest person I’ve ever met. He’s such an incredible actor. He’s such a talented actor; I’m more than grateful that I got to work with him.

SAMPSON: We’re huge David Tennant fans. He would go back and forth between accents between takes. He would go back to his Scottish accent. DOCTOR WHO fans – I’m not going to admit that I’m one of them, but I will say that they are very loyal, whoever they might be, and they’re awesome, and he’s awesome, and I didn’t fangirl one bit when I saw him. Wink, wink.

AX: Is it hard playing the emotion of seeing your parents fall apart and losing your brother?

HORCHER: It was definitely a heartbreaking thing to play, because you’d never want to be in that situation in real life, but the second you step on set and the second you’re surrounded with the people who are playing your family, it just really settles and you just kind of live it and it’s so incredible. It’s so hard to really put yourself in that position, but that is really refreshing, knowing that I could get to that place and be in that place with my family. But I definitely don’t want to go back to that place ever again, because it’s a sad part of your life.

AX: Is it something that you are able to set aside at the end of the shooting day?

HORCHER: Yes. The second they said, “Cut” and the scene was over, we all just had to hug each other and laugh and just continue with our day.

HORCHER: “Let’s get together at the hotel.” It was a very happy cast, doing such a dramatic thing.

SAMPSON: Everybody worked. They’re such great actors. Literally, Virginia is a well of tears, and as soon as they say, “Cut,” she would smile.

HORCHER: And started laughing and joking with everyone. 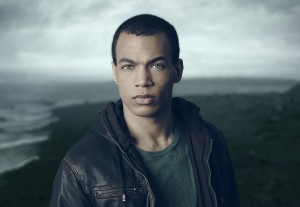 SAMPSON: We’d go to crafty [craft services] and get food and be laughing – it was a surprisingly – Michael Pena brought such light. Michael and David both were hilarious. Everybody was just so funny and cool.

HORCHER: It definitely was such a refresher, after a dark scene, to have everyone joking and laughing. And everyone’s so close, that just made it even better.

SAMPSON: It was a roller-coaster ride. It’s so heartbreaking to watch them, because they’re such good actors, but then as soon as they were done, I’m like, “You’re happy, I’m happy.”

HORCHER: It’s such a transformation, it was so much fun.

AX: There are some really powerhouse actors in the cast – besides David Tennant, Anna Gunn, Michael Pena and Virginia Kull, there are Nick Nolte and Jacki Weaver – did you get to work with them?

HORCHER: I worked with Michael Pena, Virginia Kull, David Tennant and Anna Gunn a lot. I did have a scene with Nick Nolte and it was unbelievable. Just watching him perform – it was hard for me to take my eyes off him, and I’m supposed to be in the scene, and I’m like, “Oh, we’re acting now, and Nick Nolte is standing right there being completely incredible.” It was definitely amazing, such a great experience.

SAMPSON: We all had scenes together. We had the group scenes and then we had individual, and when I wasn’t working with them, I would go sit on set and just watch them. Both of us did. And we would just learn from how they worked. Even when they stopped shooting, we were seeing their process. Some people would get pumped up and do certain things; other people were just like, “I need some coffee” [laughs]. So it was awesome just to watch their process and learn from the more experienced actors.

AX: How would you describe your characters?

SAMPSON: He’s edgy. And he’s stressed. When he softens, whenever he’s with Madalyn’s character Chloe, he softens up a bit and makes sure that she’s happy, and she’s a little pushy … [laughs].

HORCHER: In the show, he is a very great boyfriend to Chloe.

SAMPSON: She throws me under the bus.

HORCHER: I’m put in a tough situation with my parents and with the family, and he’s just like, “Well, thank you. I’m already in enough trouble. Thanks a lot.”

SAMPSON: Whenever he is accused of anything, or whenever he has a scene with someone he doesn’t know so much, he is very defensive. He is a hardworking young man and you don’t want to mess with him.

AX: Do either or both of you have other projects we should know about?

SAMPSON: I’m working on a play, a Broadway workshop, called A LADY MUST LIVE, starring Salli Richardson-Whitfield as Lena Horne. It’s a Lena Horn bio-play. I play Billy Strayhorn, who I’m slightly obsessed with right now, reading his biography. I’m a huge fan of Duke Ellington and I’m kind of ashamed to not know that Billy Strayhorn produced most of his sound. He wasn’t credited until a lot later on in his life. I play him and I play Teddy Jr., Lena Horne’s son. And I’m a huge jazz fan. Jazz is my favorite genre, so I’m kind of in heaven right now. And we’re working with Kevin Dorsey, who’s the music director. He was the musical director for Michael Jackson’s Bad tour, History tour, and This Is It, and all that. He’s just bringing some incredible, incredible stuff.

HORCHER: I just did a film with Julianne Hough called CURVE, so hopefully that will be coming out soon. It is a horror movie. Let’s just say there’s a serial killer involved, who definitely creates a lot of torment with Julianne and my character.

AX: And is there anything else either of you would like say about GRACEPOINT right now?

HORCHER: There’s so much excitement and drama and mystery that comes through the show, I’m sure every audience member who watches it will definitely have a great time.

SAMPSON: Yeah. [Most of] America hasn’t seen BROADCHURCH, it’s a fantastic show, and even if they have seen it, all of the actors bring something so different to it. They bring a different perspective to each of the characters, and the story is so compelling and entertaining and heartbreaking and uplifting, I hope that they take away the more uplifting parts than the tragic parts, because there are some really, really awesome points in there.