Home » The Dark Half review Blu-ray 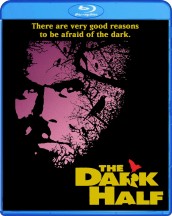 Blu-ray Review: THE DARK HALF

George A. Romero’s near miss at crafting a potentially great Stephen King adaptation 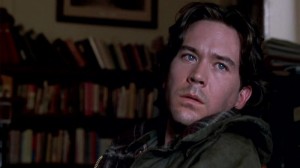 Timothy Hutton in THE DARK HALF | ©2014 Shout! Factory

Poor George A. Romero. He got the chance to do a big studio movie with THE DARK HALF, which was an adaptation of the Stephen King novel of the same name, and then it was mired with production problems and a studio at the time (Orion Pictures) which was on the verge of bankruptcy. The film sat on the shelf for years until it was dumped into theaters where few people showed up to see it.

Revisiting the film nearly 20 years later, it’s still ain’t perfect. It’s a flawed, missed opportunity that could have been another Romero classic. Instead, it’s a movie that frequently hints at what it could have been before it sidelines itself by becoming more focused on being a slasher film instead of the complex psychological thriller sitting at its core.

THE DARK HALF started life as King’s response to people finding out he wrote books under the pseudonym of Richard Bachman, so he created a story where true crime novelist Thad Beaumont decides to kill off his pen name George Stark so he can go back to writing the books he wants to write.

That backfires, when Stark manifests himself and starts killing off all the people who were responsible for Stark’s “theoretical” death.

Timothy Hutton plays both Beaumont and Stark in the film – though his Stark feels disingenuous – a Freddy Krueger-esque wise-cracking hard-boiled bad-ass. Kudos to Hutton for creating two completely different characters, but if only the film were just as interested in creating a compelling and sympathetic view of Beaumont as they do creating a monster out of Stark, then the movie would feel far more accessible.

The sad part is the movie really kicks off to a grand start. The first 20 minutes is some of the best direction and execution of Romero’s career. It’s incredible. Then Stark is killed off and the film doesn’t know where to go from there. The fact that so much time in the movie is spent to random deaths of people we don’t really care about and a completely inept police department headed by Sheriff Alan Pangborn (Michael Rooker). the film’s internal logic really tests your patience as a moviegoer.

When the movie comes to the expected conclusion, it’s neither harrowing or exciting – it’s just a letdown. And I hate to say this, but the running time is too long for a film like this. A little tightening might have actually benefited the film too.

Adapting King is so tricky and that’s why there’s more misses than hits out of his material You can have a great solid core of an idea, but if you can’t find a way to sustain for a feature film (TV movie, TV series), it literally falls apart at the seams.

That’s what happens with THE DARK HALF. It’s a movie that gets scared of its original conceit – the dual nature of a man, and goes for the obvious slasher theatrics that bog most of the film down.

Sure, there’s great make-up effects throughout, but it’s not enough to make up for the clunky plotting.

The lengthy special features including a making of featurette detailing the history of the troubled film, a look at the special make-up effects and visual effects, Deleted Scenes (nothing revelatory), vintage EPK features, trailers, storyboards and the original ending (in storyboard form).

Go to Shout! Factory to Purchase THE DARK HALF