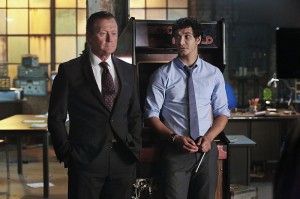 In CBS’ SCORPION, Mondays at 9 PM, Elyes Gabel stars as brilliant FBI consultant Walter O’Brien. O’Brien is a real person and is one of the series’ executive producers. He really does run Scorpion Computer Services and really consults with the U.S. government, as well as private companies, although he doesn’t get out in the field as much as the version of him played by Gabel. SCORPION’s version of Walter heads up a small group of fellow geniuses, all with their own areas of expertise, who work warily with their government liaison Cade Gallo, played by Robert Patrick, and a civilian with people skills, played by Katherine McPhee.

Gabel (whose full name is pronounced EL-ee-as Ga-BELL) is originally from London, England, though he’s spent some of his formative years in Canada. He spent seven years as a regular on the BBC medical drama CASUALTY. Genre fans have seen him grappling with the living dead in both the feature film WORLD WAR Z and the British Channel 4 miniseries THE DEAD SET, and as loyal Dothraki warrior Rothkaro in GAME OF THRONES. More recently, Gabel was a series regular on the last season of BODY OF PROOF, playing an American police detective.

Gabel is present at a party CBS is throwing for the press and its talent. He obligingly moves to a relatively quiet area to talk about playing his first series lead.

ASSIGNMENT X: How is being a lead on an American series different from being a British TV lead?

AX: How did you become involved in SCORPION?

GABEL: I auditioned. I was working in New York on a film at the beginning of the year, and I put a tape together at CBS, they sent it off, then – this was very near to shooting – I discussed with the producers and the director [Justin Lin] what my thoughts were, what their thoughts were, and they took that in, and luckily we kind of agreed on the pattern, and it worked.

It’s interesting, because at every turn, every different medium has got a different sensibility to the way that they audition and the way that they hire people. Independent films, sometimes the auteur might have a different way of auditioning – I might meet them and I might strike a chord, the financiers might not want to employ me, but [the actor and the director] have an understanding. Now with TV, that’s a different thing, and within [different TV networks and series], there are different variables as well. I just wanted to make sure that I was working with people who wanted to explore the best qualities out of what I thought this project brought and what I understood. Because if you’re not on the same line, you’ll never really have an understanding and you’ll never be able to convey it to people.

AX: How would you describe the character?

GABEL: Yes. I think the thing about this show – when I talked to the writers and Justin Lin about it, what made me really interested in really committing to a possible long television type of thing is the empathy and the hope and the emotion. As long as you’ve got that sorted – he [is living with the] cost [of past actions] and he has an empathy. He was [unknowingly] responsible for killing two thousand civilians in Iraq. So if you have that weighing on your shoulder, it’s pretty serious.

What happened was, the character that Robert Patrick plays, Cade Gallo, became my surrogate father in a way. I was a genius, I hacked into places and elements that I shouldn’t have been in – governments, NASA, places that nobody should be in – when I was thirteen. Cade was responsible for removing me from my home in Ireland [and recruiting Walter for the FBI]. So a few years down the line, I give him a software package that’s ostensibly meant to drop Red Cross aid packages, to help kids, shelter, food. And what it does – I turn on the TV a little bit later, and they’re using the software for drones to drop bombs in Iraq. And because I developed it for speed, it’s just drop, drop, drop, speed over accuracy. I developed it for speed over accuracy for a reason, but they use it for a different reason, in a different context, and end up killing two thousand people who weren’t culpable. They were collateral damage. That’s the raison d’etre for what he’s trying to accomplish [by saving people] right now.

AX: As a TV series character, Walter is sometimes referred to as a “nerd.” Would you agree with that description of your character? Not the real Walter O’Brien, obviously.

GABEL: I don’t think that’s the way that I would look at it myself, and definitely not the way my character, Walter O’Brien, would look at it. The great thing about this show is, you have intelligent people doing problem-solving things that are essentially very, very dangerous. So I think if you have that understanding of the danger, and [Walter and his team] trying to resolve that danger that other people can’t, I don’t think you can call them “nerds,” because they in essence are doing things that “cool” people, by whatever conventional perception, can’t do.

AX: Walter has incredible computer skills, but obviously this isn’t a show about someone typing in front of a screen. How do they get you away from the computer and into the field?

GABEL: Oh, in many different ways. The fact is, with American series television, what I’ve realized is that it really is a moveable and changeable feast. We have the Cabe character, who brings us different enemies or different problems to solve. My unit is based with myself and a bunch of other IQ geniuses. So if you’ve got an IQ of 150, generically, you’re termed a genius. Basically, [Walter has formed an organization] for finding intelligence to resolve problems that the world has coughed up. So I think the possibilities are really endless.

AX: Did you have to research anything to play the character?

GABEL: Well, Walter’s a real-life guy. That’s one of the reasons I found it really, really interesting – he’s an incredibly interesting guy. I’ve spent a lot of time talking to him and also just observing the guy. Not in a weird way, but making sure that the way the logic, the rationale that you’re employing when you’re using the words and the structure and the narrative [makes sense].

AX: Are you using your own speaking voice, or are you doing an American accent for Walter?

GABEL: I’m doing an American. I’m trying to play a little bit, because Walter is really Irish, and if you meet him, you’ll see he’s got a slight American tinge, but he’s basically Irish. So I tried to put a very, very subtle haze of Irish in, but it has to be understood by the masses that this show is appealing to.

AX: What else have you got going on that we should know about?

GABEL: I did a little thing called INTERSTELLAR with Chris Nolan. It’s a very short bit. I did a film in New York called A MOST VIOLENT YEAR with J.C. Chandor. It’s a great little film set in 1981, the most violent year that New York’s records have had. The crime index was huge, really, really horrible. Oscar Isaac is in it, Jessica Chastain, Albert Brooks. It’s really good. And I’ve been English show, transitioning – there used to be an English show called SPOOKS, and in America, it’s called MI5 [the film version is SPOOKS: THE GREATER GOOD].

AX: It’s the British version of the CIA.

AX: Are you playing a CIA agent?

GABEL: I’m playing the ambiguous antagonist. Yeah, you got it here. I’m basically playing a freedom fighter who is the most wanted man in the world [laughs].

AX: Do you feel like there’s a sort of existential continuum where your SCORPION character could be investigating your SPOOKS character?

GABEL: There’s definitely a possibility of parallel, because in essence, the story starts in the film where I escape from custody, or my team help me escape, and it’s all about how to trace me back and how to catch me. So that would definitely be a problem-solving aim that Walter was brought by Cade.

AX: At this point, you’ve played mental badasses and physical badasses. Which one feels more badass to you?

GABEL: Do you know what it feels like? If I answer that really seriously, it depends how you shoot a thing. How I prepare for a thing is very different. They’re both very interesting, because the pen is mightier than the sword at certain points, but when you’re up close and personal, the bear’s going to hurt the sh*t out of a dog, and that’s not just through intellectualizing. So I think it depends in context. I’d love to be just a super amalgamation of both, really.