Bones Review The Mutilation of the Master Manipulator Season 10

TV Review: BONES – Season 10 – “The Mutilation of the Master Manipulator” 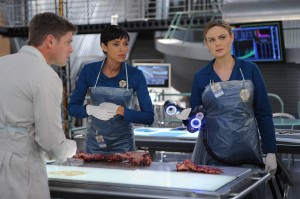 The BONES episode “The Mutilation of the Master Manipulator” does a fine misdirect with its whodunit aspect. When parts of a murdered man turn up in garbage all over a tri-state area, the Jeffersonian team seeks to learn his identity. It turns out the victim was a university psychology professor in the Stanley Milgram mode, who put his students through experiments where they believed they were administering painful, even lethal, electrical shocks to others. At least one student has cracked under the guilt (even though it turns out the shocks were faked); two female students had affairs with the professor.

However, it turns out the murder had nothing to do with any of this. The professor’s bird-watching neighbor (Miriam Flynn) was trying to poison the man’s cat to stop it from going after her feathered friends. The cat survived the altercation, but the professor did not. The neighbor used a yard sculpture made of metal blades, constructed by one of the professor’s girlfriends, to cut up the corpse.

This aspect of the episode is very good, taking us hither and yon in terms of suspects. The psych experiments are actually intriguing enough to warrant more exploration – what was the professor hoping to accomplish, for starters, self-knowledge or self-loathing? Because this turns out not to be the motive, we never find out.

We also never find out what happens to Skinner the cat (presumably named for B.F. Skinner, another pioneer of controversial psych experiments), who Hodgins (TJ Thyne) takes back to the Jeffersonian rather than turn him over to Animal Control. On the one hand, yay Hodgins, and on the other hand, since the cat is in a wire cage with no litter box or water, this raises all sorts of other questions, some of them sanitary. (We appreciate that BONES is not meant to be entirely realistic, but … come on.)

The other part of the story deals with lab assistant Wendell Bray (Michael Grant Terry), who celebrates his remission from cancer by embarking on an affair with nurse Andie (Shalita Grant). Wendell then hastily tries to back away, but when Andie finds out this is because he fears dying on her, she gives him a good carpe diem speech and he decides it’s worth the risk.

Now, Terry is very likable and capable as Wendell, we wish the character well, and Grant is appealing, too. However, this is a comparatively huge chunk of episode time to spend with something not related to either or regular characters or the murder investigation, the elements that ostensibly motivate us to tune in. Given that the 200th(!) episode is on next week and presumably was up next on the shooting schedule, the behind-the-scenes reason for this may be that all hands were needed on deck for that elaborate production, but it’s still a noticeable deviation from the norm.

This aside, “The Mutilation of the Master Manipulator” is a solid episode of agreeable procedural.