Home » Bones review The Lost Love in a Foreign Land 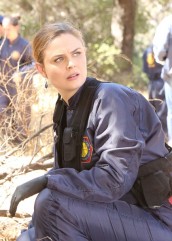 Worthy if occasionally earnest episode about human trafficking in the U.S. 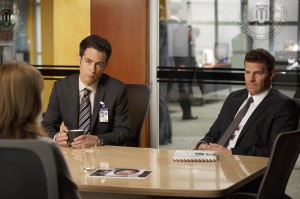 BONES sometimes uses its storytelling to deliver worthy messages. “The Lost Love in the Foreign Land” is an example of this, with the body of a young Chinese woman, Mei Yun, leading to the discovery of a human trafficking ring. The teleplay by Emily Silver is commendable in the way in incorporates so many different aspects of tragedy and appalling choices inherent in the situation, including a few that probably won’t have occurred to the audience at the start.

The B and C stories here are woven together, as Arastoo (Pej Vahdat) is hurt both by Brennan’s (Emily Deschanel) rejection of his dissertation proposal and by Cam’s (Tamara Taylor) reluctance to discuss the subject of marriage.

In the murder investigation, the victim had a number of items that seemed to have been stolen. Booth (David Boreanaz) and Aubrey (John Boyd) track a watch to wealthy Sandra Zins (Phyllis Logan of DOWNTON ABBEY) who had employed Mei Yun as a maid. The next stop is Victor Lee (Francois Chau) who ran the employment agency that sent Mei Yun out on jobs. Lee professes shock and sorrow over the young woman’s death.

When the lab’s findings lead the FBI agents to a house near the body dump site, it turns out to belong to Lee. Lee tries to keep Booth and Aubrey out, but they hear a noise – and discover that Lee’s basement is full of undocumented Chinese women, most of them with bruised faces. Lee has clearly brought them here and is keeping them prisoner. Indeed, when questioned through an interpreter, group spokeswoman Tammy (Leann Lei) explains that Lee threatened harm to their families back in China if they tried to escape and/or contact the authorities.

Then another suspect turns up – a young man named Sung Park (Scott Ly) killed Mei Yun’s father back in their village in China and is now working on a nearby construction site. However, when brought in for questioning, Sung is horrified. He and Mei Yun were to have been married, but her father beat and humiliated her, so that Sung finally killed the man. Sung had thought his intended was still safe back in China.

Although Sandra Zins also turns out to be involved in the human trafficking and enslavement of immigrants and Lee is appalling, the killer is actually the sympathetic Tammy. She becomes identifiable as the culprit when Brennan and Aristoo deduce that manicurist Tammy killed Wei Yun with a nail-treatment tool. Tammy explains (again, through an interpreter) that Mei Yun kept sneaking out, searching for Sung. Lee threatened everyone’s families if Mei Yun went out again, but she wouldn’t stop. Tammy, fearing for the life of her young daughter, killed Mei Yun.

Brennan and Booth are understandably troubled by the case – both try to imagine what they would do in Tammy’s shoes, if they thought their young daughter Christine was being endangered by the innocent actions of someone else. It’s a sobering moral question, and the episode doesn’t try to provide an easy answer.

Booth has a teaching moment with Aubrey, who – back when it seems like the case is relatively simple – sees this as a possible step up the ladder. By the time the facts are known, Aubrey is horrified that he ever thought about this in terms of what it could do for him. Here the episode seems a little didactic – most people tend to be conscious of how their actions on the job will affect their futures, though Aubrey’s expression of these thoughts is a bit cavalier.

There’s a nice twist with Brennan’s dismissal of Arastoo’s dissertation subject – it turns out she wants him to cover new ground, not tackle a subject simply because he thinks it will please her. In the end, he proposes a dissertation on how forensics can be used to combat human rights abuses, which Brennan accepts.

On top of all this, Cam, flustered by the fact that she’s already hurt Arastoo, tries to talk to Brennan about the dissertation. This has the effect of wounding Arastoo’s pride, as well as making him feel that Cam doesn’t believe he can stand up for himself. In the end, Cam sees where she made mistakes and indicates that she is willing to talk marriage after all. They make up.

“The Lost Love in the Foreign Land” has a lot going on it. The dialogue sometimes is on the nose, but it’s for a good cause, and the story construction serves character and mystery very well.