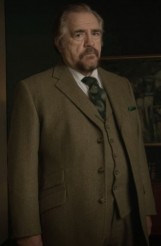 The actor talks his spymaster role in the BBC America miniseries 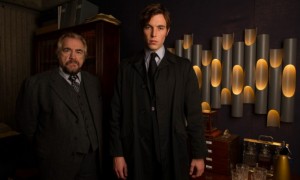 Although he plays all sorts of roles, Brian Cox is known for portraying men who are bold, in charge and often devious. In addition to being the original Hannibal Lektor (as it was then spelled) in MANHUNTER, a few of the Scotland-born actor’s more memorable film roles include Robert McKee in ADAPTATION, Col. William Stryker in X-MEN 2, King Agamemnon in TROY and Russian spy Ivan Simonov in the RED films, plus and BBC executive Sydney Newman in the telefilm AN ADVENTURE IN SPACE AND TIME (about the early years of DOCTOR WHO).

Now Cox is adding another character to his power-player roster, the MI6 spymaster known as “Daddy” in BBC America’s miniseries THE GAME, Wednesdays at 10 PM. Toby Whithouse created the espionage thriller, which takes place in the early Seventies. Daddy’s top agent Joe Lambe (Tom Hughes) has an agenda that doesn’t necessarily fit the agency’s, just as a nuclear crisis may be looming between the U.K. and the Soviet Union.

Cox is at a party thrown by BBC America for the Television Critics Association, where he takes some time to talk about playing in THE GAME.

AX: You do a lot of feature films. Did THE GAME particularly draw you to doing television, or do you think the difference between the mediums doesn’t matter these days?

BRIAN COX: I don’t think there are dividing lines any more, really, between film and television. I think that some of the best writing is in television, not in the cinema any more, except in independent films. And I like good writing. There’s still good writing in the cinema, but really, television is much more orientated to writing.

AX: What appealed to you more about THE GAME, your character or the overall story?

COX: I think the whole mise-en-scene, really. The whole thing was really good. I just liked the whole structure of it, I liked the fact that it was a writer who’d worked with a group of writers– I mean, British writing has got much more influenced by how they do things [on U.S. television, for example] David Milch, who I think is one of the true geniuses of television, and I’ve worked with him on several occasions, I just like the work that he does and I like the way he works, and that’s very much the way that they do filming in [the U.K.]. They make good television in Britain.

AX: Are there differences between Daddy and some other characters you’ve played that you can point to?

COX: I just think it’s a good role. It’s a paterfamilias. It’s a guy who runs the show, and that way, it’s a much more interesting role, but he also operates from the back foot and the front foot, alternately, and it’s great, because it’s a character who maneuvers things, maneuvers fates. He’s a bit Zeus-like, and I quite like that aspect of him. And also, he has a flawed quality, which is quite interesting.

AX: You tend to play a lot of Machiavellian people in command. Are those roles that you’re particularly drawn to, or is that just how you keep getting cast?

COX: People kind of like me like that, and it’s not something I’m sort of drawn to, but I kind of magnetize [those types of roles]. They kind of come to me in a magnet form, and they’re usually interesting roles to play, and I don’t tend to turn them down. I’ve found if I like the script, I tend to give it a go, as it were.

COX: I’m currently doing a film [PIXELS] with Adam Sandler, which is quite the opposite, because it’s my comedy life, which I love. I just did a wonderful comedy series in Scotland, which goes out on the BBC in Scotland, BBC 4, which is that other channel that we have, and I think I’m doing a play in London, and I’m still looking at things to do.

AX: Is there anything else you’d like to say about THE GAME?

COX: I just think THE GAME is cutting-edge television. It’s very much in the tradition of what’s going on in the zeitgeist. As I said about British writing – [as with] BROADCHURCH, it seems to me there’s thing kind of thing that’s happening, [of scripts with] characters who are not what they seem to be. They present something, I think, to be discovered, like great works, great drama, that there is something else, and that’s very much what these writers are doing, and it’s a very exciting thing to be part of.