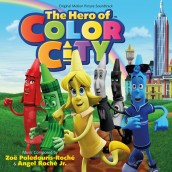 CD Review: THE HERO OF COLOR CITY and NINJAGO soundtracks 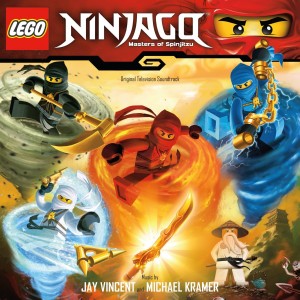 Varese Sarabande continues to diversify to different audiences, in these two cases musically appealing to the younger set. The wee ones, particularly children with a thing for crayons, should enjoy repeated listening to THE HERO OF COLOR CITY. There’s a sweet, gentle enjoyment they’ll find in the songs and score by ex Ziggy Marley drummer Angel Roché Jr and Zoë Poledouris-Roché, who helped her dad Basil cook up an especially important theme for the way-more adult CONAN THE BARBARIAN back in her younger days. Tunes like “Color the World” and “Heave Ho” have cleverly rhyming lyrics and catchy melodies perfect for bedtime playing. As led by a catchy, hand-clapping theme, COLOR CITY‘s  instrumentals capture a similar charm, with lullaby-ready bells, energetic lite rock percussion and a fun Reggae rhythm, creating the kind of tinkertoy band tunes budding composers might be playing in their heads as they let their imaginations put crayon to blank musical paper.

The tone of NINJAGO has a decidedly more adult feel as Jay Vincent and Michael Kramer give an epic, Oriental sweep of the Lego knee to the MASTERS OF SPINJITZU. Collecting music from the hit Cartoon Network series into an impactful hour of the score’s biggest hits, NINJAGO impresses with its determination to reach the musical power of KUNG FU PANDA. If anything, Vincent and Kramer are determined to be really serious (though no less fun) in melding a western approach with Oriental block fists of fury. Strong orchestral samples work quite well in tandem with Asian percussion, metal guitar, and a Chi-channeling chorus, creating a sense of dramatic excitement, and even danger that belie the playfully animated concept. It’s an admirable determination to really play in a big martial arts music sandbox that gives NINJAGO an appeal of truly strong themes that chopsocky score aficionados will be pleased by, even as the score’s dynamic range begs out for a true symphonic army that could befit the excitement that the composers get a black belt for in conjuring.

Click on the link to Purchase the NINJAGO soundtrack