Bones Review The Puzzle in the Pit Season 10 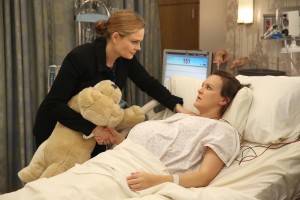 Squintern Daisy Wicks (Carla Gallo) has spent Season 10 of BONES heavily pregnant, and in “The Puzzle in the Pit,” she gives birth, surrounded by her lab “family.” This is at once pleasant and a little depressing, as since Daisy isn’t really a major factor in any of their lives, it’s sad she hasn’t got any closer friends who can be there for her.

Meanwhile, the team is investigating a corpse found in a fracking site. Everyone’s first thought is that this is a murdered protester, but the deceased turns out to be Cam’s (Tamara Taylor) favorite crossword puzzle writer. Suspects include the wife, a colleague whose work the dead man inadvertently plagiarized and the writer’s embezzling assistant. The culprit, however, turns out to be the man’s son, given up for adoption as an infant. The writer had developed Alzheimer’s and didn’t realize that he was using someone else’s work or that his assistant was stealing from him. When his son made an appointment to see him, the writer forgot both the meeting and in fact that he had a son at all. When confronted, the writer lashed out physically, the son pushed back and the older man, whose bones were brittle, landed badly and broke his neck. In a panic, the son tried to dispose of the body.

It makes sense that the main characters, particularly Booth and Brennan, who were close with the late Sweets, and Angela, who is maternal toward practically everyone, would want to be present and available for the birth of Sweets’ and Daisy’s son, but there seems a rush to insist on closeness where it has not been well established.  Indeed, we know that Brennan and Daisy spent a good deal of time together awhile back, and didn’t bond.

Even so, there are a lot of good moments here, including the fact that the remains are dissolving in the lab due to hydrochloric acid until Hodgins (TJ Thyne) comes up with a quick baking soda save. The Alzheimer’s thread is wistfully imaginative and Gallo makes the most of this more thoughtful, confident evolution of Daisy. Brennan enthusiastically spouting Yiddish is also a high point.

It is a bit of a shame that more wasn’t done with the crossword puzzle aspect of the storyline, but for the most part, “The Puzzle in the Pit” is a decent episode.