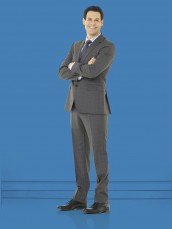 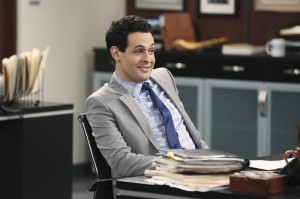 Andrew Leeds plays Josh, Cristela’s work colleague. The actor, originally from Florida, is also known to NCIS viewers as tech operator John Booker and to BONES fans as brilliant serial killer Christopher Pelant. His many other credits include the films MAJOR PAYNE and SUBJECT: I LOVE YOU, arcs on THE PRACTICE, CULT, DIRT and NIP/TUCK and appearances on AMERICAN HORROR STORY: COVEN, THE FOSTERS and CASTLE.

Leeds is at a Q&A session ABC holds for CRISTELA and the Television Critics Association. When it ends, he remains to discuss his character further, along with the late Pelant – and, it must be noted, the remarkable tie he is wearing for this occasion.

ASSIGNMENT X: That is a great tie. The pattern is almost three-dimensional.

ANDREW LEEDS: I really appreciate that. I’m very excited about this tie. It’s interesting, too, because I think it’s blue and orange, but it almost looks like it’s got a reddish-pink when you put it together. Your eye puts things together.

AX: Can you say more about your CRISTELA character Josh?

LEEDS: I work at the law firm with Cristela, we both get hired on the same day to work there, we’re both interns at the law firm, and we take a liking to each other immediately, even though we’re from very different backgrounds. I come from a wealthier family, and I kind of had everything sort of handed to me in life.

AX: So there’s a possibility of romantic interest down the road here?

LEEDS: You never know. A possibility for sure.

AX: Is this your first series regular role on a half-hour comedy?

AX: Are you finding it different from working on a drama?

LEEDS: It’s totally different. I’m also a writer, so some of my time I spend writing. So for me, doing this is sort of like a weight off my shoulders, because I get to come to work and have someone else worry about everything else, and I can just be an actor and have a good time, but I think the element of it being live and having an audience reaction is amazing. On a drama, you don’t get that. And also, just the energy on a drama is different. You don’t get to rehearse, really. Whereas in a sitcom, you get to rehearse. So it’s really like doing a play. So it’s really, really fun.

AX: Does Josh have any personality aspects that you had to take time to work out for yourself as an actor, that were far away from who you are in real life?

LEEDS: He’s a lot closer to me than Christopher Pelant was. But definitely, as the show goes on, he’ll start to grow more and we’ll start to find more things about him. He’s definitely closer to me, but I think he’s a little bit different, but yeah.

AX: Is he entitled at all and gets brought down a little by the job?

LEEDS: He’s not entitled. He’s actually very aware that he’s been spoiled. I wouldn’t call him entitled or bratty, but there’s a sweetness about him, so I think he can get away with the fact that everything’s been handed to him, but he’s not a bad guy. He’s certainly more politically correct than some of the other characters.

AX: Did you have to learn anything for this part, anything about the law or speaking Spanish or working with the multi-cam setup?

LEEDS: No, not really. I definitely haven’t learned any Spanish at all. When [Cristela’s family is speaking in Spanish], I have no idea what they’re talking about. I’ve learned little things about the law here and there, because there are some lines where you’re like, “Oh, what is that, what are you talking about there?”, so you sort of pick up some stuff, but no, no Spanish yet. But maybe.

AX: What about working with multi-cam?

LEEDS: I’ve done it before – I’ve done some episodics before, I’d done a pilot before that was a multi-cam, but [CRISTELA] is different, but I started out acting in theatre when I was young. For most of my childhood, I was acting [in front of live audiences] in New York, and so it sort of is the place that feels the most natural to me and most at home, I would say.

AX: How is working with Cristela Alonzo?

LEEDS: She’s a lovely, lovely person, very down to Earth. Before the panel, we were looking at each other like [talking about CRISTELA in front of a large audience], “Oh, my gosh. This is amazing.”

AX: You also had a three-season arc on BONES as deeply annoying serial killer Christopher Pelant …

LEEDS: Well, annoying, maybe, because I was too smart for them to catch, if you want to call it “annoying” [laughs].

AX: Well, somebody who kills people is heinous. Somebody who continually remotely messes with your computers, which Pelant also did, is deeply annoying, as well as heinous.

LEEDS: Messes with your computer and keeps two people apart who should be together. So yes. That was a great, wonderful job, and it was such a great group of people to work with. It was nice, because it started out as just one or two episodes and every time I get a script, it would be like, “Uh-oh, am I going to die?” and I managed to stay alive over the course of three seasons. So it was a pretty great experience.

AX: You had to do your last season wearing facial prosthetics. How was that?

LEEDS: It was tough. In the last couple of episodes, they actually put a contact lens in my eye. Once it’s on, it feels like it’s part of your face, but the process of putting it on and taking it off, especially if you have to go to work like three days in a row and you’re peeling that thing off of you, it can be rough. But I wouldn’t have traded it for the world. It was great.

AX: When you’re playing somebody like that, do you think, “I’m very confident of my intellect” or do you think, “Now, I have to get my mind around the fact that this person does things” that you in real life presumably don’t approve of?

LEEDS: No. I mean, it’s interesting, because when you’re playing someone like that, you’re having to try to figure out the things that they’re figuring out, the things that they know. And so it’s fun to try to be a detective. I remember, every single episode, I’d have to go back and be like, “Okay, the one before this, I killed So-and-So, and the reason I did that was because of this.” And I sort of looked at all the things I had done and why I had done them. So it was sort of an interesting thing.

LEEDS: I just did [individual episodes of] HOT IN CLEVELAND and IT’S ALWAYS SUNNY IN PHILADELPHIA. Other than that, no. Just living a great life.

AX: Anything else we should know about CRISTELA the series?

LEEDS: CRISTELA is just a really fun show that everybody in the family can watch, and it’s funny and it’s charming and it’s sweet and it makes you feel very comfortable. You feel like you’re in your house, you know what I mean? Cristela and her family just feel like people you want to be around.