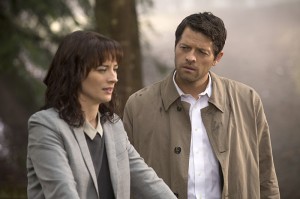 You’ve got to love a SUPERNATURAL episode that packs together online dating, demon pimps, a coven-seeking witch (Ruth Connell), angels making ethical choices, Dean’s (Jensen Ackles) vengeful stalker – and Crowley’s (Mark A. Sheppard) mother. Even better, Robert Berens’ teleplay for “Girls, Girls, Girls” drops most of them in just when our attention is elsewhere, the better to surprise us.

Sam (Jared Padalecki) takes great delight in razzing Dean when he discovers that big brother has found an online hookup – for all Dean knows, “Shaylene” could be a Canadian truck driver named Bruce. Then Shaylene (Elysia Rotaru) shows up in the gorgeous flesh, making the eight-hour detour to have the assignation worth it for Dean (though Sam is exasperated).

While Shaylene is not a Canadian truck driver, she does turn out, to Dean’s profound disappointment, to be a hooker. But it turns out Shaylene doesn’t want cash – just for Dean to sign a contract handing his soul over to Shaylene’s boss. Maybe this detour wasn’t such a waste of Sam’s time after all.

Needless to say, things end poorly for Shaylene’s demon pimps. Sam and Dean learn from Shaylene that the demons were running a brothel, but before the Winchesters can arrive, Rowena (Ruth Connell) gets there first. Rowena is a witch with no patience for demons or pimps, and a great spell for getting rid of the combination. The two working ladies on the premises, Catlin (Chelsea Hobbs) and Elle (Kirsten Comerford), are happy to follow their savior out the door.

Finding the dead demons, Dean and Sam do some research and find that Rowena has battled demons over the centuries, but she also seems to have killed some mortals as well.

Rowena would like to build a coven, but she loses both prospective acolytes. When Sam catches up to her, Rowena puts an attack dog spell on Elle, which causes Catlin to punch the witch and make a run for it. Rowena is about to put a lethal spell on the young woman, but she is stopped by Dean – who is in turn forced to let Rowena go by someone who misunderstands the situation. This would be Cole Trenton (Travis Aaron Wade), who has been stalking Dean all season due to Dean killing Cole’s dad back in 2003.

While Dean and Cole are slugging it out, Sam arrives and gets the drop on Cole. Dean tells Sam not to shoot and finally gets to explain to Cole that Cole’s father had at the time become possessed or impersonated by something that killed people in order to eat their livers. Dean still isn’t sure what the creature was, but it could have killed Cole or Cole’s mom. The last time this came up between them, Dean was a demon and hence didn’t feel like telling Cole the story. Dean says he is beyond saving, but Cole still has a wife and son. Cole lets Dean go and heads home to his family.

Sam of course is all over Dean’s “beyond saving” comment – Dean assures Sam he was just saying what Cole needed to hear. We of course know that Dean is now just saying what Sam needs to hear. (If there’s another SUPERNATURAL musical, this moment is ripe for a song.)

Meanwhile, Castiel (Misha Collins) and Hannah (Erica Carroll) are still on the road when Caroline’s husband catches up with them. Caroline, should you be wondering, is the human woman whose body Hannah has taken. Hannah persuades the husband that “Caroline” has left him for Castiel, but thinks better of it later. Hannah concludes that if the mission is really about helping humans, then she ought to help Caroline by heading back to Heaven and letting Caroline have her life back. Caroline is delighted to be reunited with her spouse, who’s happy to have her back, and Cass looks up Jimmy Novak, the family man whose body he is using.

Down in Hell, Crowley is bemoaning his lack of competent staff. A team of demons has managed to capture Rowena and is torturing her in punishment for killing some of their own. They have her chained up, but she seems unafraid of Crowley, taunting him. All Crowley has to say is, “Mother?!”

Well, that’s as good a conclusion as the episode could possibly have, and it leaves open a whole world of possibilities, not the least of which is seeing Crowley deal with his parental issues. With Sheppard in the role, whatever happens is bound to be swell.

Castiel’s part of the story has a nice grace note – he gazes wistfully at a gas station convenience store, remembering when he was human – and brings us to an excellent question, namely how on Earth he’s going to deal with his body problem. Angels require willing vessels, but Jimmy may want to go home now. Hannah says she could feel Caroline inside her, needing to get back with her husband. Again, interesting possibilities here.

Mainly, though, “Girls, Girls, Girls” is delightfully plotted and executed, with people constantly surprising us and each other, culminating with a whammy that’s sure to deliver a lot as it goes forward.