©2014 The CW/Michael Courtney
Jared Padalecki as Sam, Izabella Miko as Olivia, and Jensen Ackles as Dean in SUPERNATURAL - Season 10 -
Reviews 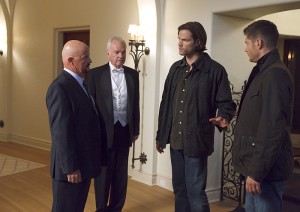 SUPERNATURAL goes from the sublime (the previous week’s “Fan Fiction”) to the serviceable with “Ask Jeeves,” a pastiche of CLUE and MURDER, SHE WROTE (visually and verbally name-checked here), with the addition of a monster.

The best thing about “Ask Jeeves” – kudos to the editing department – may be the “Then” sequence, i.e., SUPERNATURAL’s catch-up prologue, which here reminds us not only of Dean’s (Jensen Ackles) bout with having been a demon and stuck with the Mark of Cain, but a whole gamut of creatures that the Winchester brothers have faced.

With nothing to chase after, Dean and Sam (Jared Padalecki) decide to follow up on a message received on Bobby’s old cell phone, inviting their deceased comrade to come to a reading of a will. This turns out to be the testament of the wealthy Bunny LaCroix, whose money-grubbing relatives all turn up for the funeral and dispensation of the late woman’s assets. Bunny has left Bobby a key that opens the door to a secret attic.

We see, or think we see, Bunny’s ghost kill a maid who tries to steal her pearls; later, we see the ghost of Bunny’s husband decapitate another family member who besmirches Bunny’s name. The butler Philip (Kevin McNulty) is apparently in cahoots with the ghosts – but then he’s found murdered. Sam and Dean realize they’re actually dealing with a shape-shifter who is pretending to be ghosts. The shape-shifter turns out to be the surviving housemaid Olivia (Izabella Miko), who is actually the daughter of the late Bunny and a shape-shifter. Bobby killed Olivia’s real father; he allowed Bunny to keep her daughter on the condition that Olivia remain locked up in the attic. Philip let Olivia out, but by then she’d gone bonkers. Sam tries to reason with her, Olivia won’t listen and Dean shoots her. After she’s dead, Dean shoots Olivia’s corpse some more. This causes Sam to worry that his brother may not yet be over his demon phase, even though Dean insists he’s fine.

The episode has some mild fun with Sam and Dean speculating about how Bobby could have known Bunny – they suppose there has been an affair, until Olivia gives them the truth. There’s also some stuff that’s way too obvious, and too arch, to be amusing with the two older women on hand expressing a great deal of interest in Sam and Sam running hot (when he’s trying to get information) and cold (when he’s not). He doesn’t even get a good line of dialogue about his discomfort.

There is a decent plot twist when the brothers find out that the “silver” they’ve been using is actually useless stainless steel and the back story leading to Olivia’s current behavior is solid. Otherwise, the script tries a little too hard to find humor in putting the guys into what would be an Agatha Christie-type mystery (plus a shape-shifter and some gore, of course), but it’s serviceable. “Ask Jeeves, isn’t this show at its best, but it’s reasonably diverting.