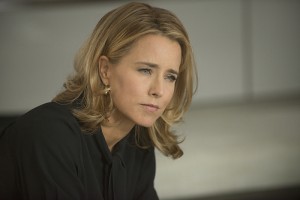 On CBS’ MADAM SECRETARY, Sundays at 8 PM, Tea Leoni stars as Elizabeth McCord, a CIA analyst who is promoted to U.S. Secretary of State when the previous occupant of that position dies under suspicious circumstances.

The freshman series is a success; it is also the first scripted television series from Revelations Entertainment, the production company headed up by Morgan Freeman (yes, the Oscar-winning actor) and Lori McCreary, both of whom are executive producers on MADAM SECRETARY, along with series creator Barbara Hall.

McCreary opens a Q&A session that CBS holds with the executive producers and cast for the Television Critics Association with, “I just want to talk a little about how this show came about. Morgan and I some months ago met with [Chairman of CBS Entertainment] Nina Tassler over lunch and told her that we wanted to make a break into scripted television for the small screen, and Nina started by saying we needed to find a character whose story we wanted to tell. And after that, we went back to our office, and I was talking to Tracy Mercer, our development person, and we were trying to come up with a great new character and guess what happened – the Benghazi hearings.

“We started hearing this news cycle about what was happening in our embassies overseas, and we started asking ourselves questions. What really happens in those American embassies overseas? We know we go there when we get into trouble when we’re traveling, but what happens on a daily basis? And what’s life like for the Secretary of State? Especially, how does that translate overseas when [the Secretary is a woman and] rights for women are not necessarily the same as they are here? Then, the issue of balancing an incredibly heavy workload with a personal life, and how do you even plan a single moment of your life, a baseball game, when at any minute you could be dealing with rocket attacks in Israel, a military coup in Pakistan, and a border crisis with Mexico? Sometimes that’s all before lunch. So that’s when we decided to do a show about a Secretary of State, and in particular, a female secretary of State. And Morgan christened it MADAM SECRETARY. So we pitched it to Nina. She loved the idea. And in a stroke of genius, as I’m told she has many times, she introduced us to the inimitable Barbara Hall, who took that kernel of an idea and made it what it is today.”

When the session ends, McCreary takes some time to talk about MADAM SECRETARY and Revelations Entertainment overall.

ASSIGNMENT X: A question about the spelling of the title – “Madam” as opposed to “Madame”?

LORI McCREARY: [MADAM] is actually the American way of spelling it. We did extensive research. Our first one had an “E” and we got corrected very quickly.

AX: How long have you been working with Morgan Freeman?

AX: Although this is your first foray into scripted TV as executive producers, have you been producing unscripted for all that time?

McCREARY: We’ve been producing unscripted and features over the years, and unscripted that we’re doing for Discovery and Science – we [have] THROUGH THE WORMHOLE, we have MAN VS. UNIVERSE, we did something on stem cells, so we’re kind of digging into the whole science world.

McCREARY: I say to my friends who are in features and haven’t done scripted television that I feel like next time I do a feature, I’m going to be on a vacation. Scripted television is really hard and it’s long hours, but I think scripted television gives us the chance to do what we used to be able to do in that [budgetary] midrange of feature films, those great dramas that are going away. [Revelations Entertainment’s] SHAWSHANK [REDEMPTION], THE GREEN MILE might not have gotten green-lit in the past couple years, so those kinds of things are going to have to find their homes on television.

AX: Do you want to do more scripted television?

McCREARY: Absolutely. We think it’s a great place to have strong female leads, strong great leads that you can explore over hours and hours.