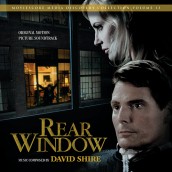 In a particularly striking case of turning fate’s rotten apples into ironic oranges, quadriplegic actor Christopher Reeve went with his immobilizing accident to gain the opportunity of bring true realism to the part of the paralyzed, voyeuristic hero – whom unlike the broken-legged James Stewart of the Hitchcock original – isn’t going to be getting out of his wheelchairl. Beyond Reeve get an Emmy nomination for his performance here, the TV remake’s second Emmy recognition would deservedly go to composer David Shire. With such memorably tense scores to his credit as THE CONVERSATION and ALL THE PRESIDENT’S MEN, Shire approached this new, especially creepy view from this 1998 REAR WINDOW in a far more musically active manner than Franz Waxman applied to the 1954 Alfred Hitchcock original.

In fact, if any of the master of suspense’s composers haunt this technology-filled apartment, then that spirit belongs to Bernard Herrmann, as Shire uses a cinematically lush orchestral sound to play a gripping cat-and-mouse game with the wife killer across the street – a villain captured with jarringly percussive hits right at the start to signal this take on REAR WINDOW will be far more frightening. Setting up a warmly empathetic theme for Reeve’s immobilized architect, Shire’s twisting,hair-raising themes vary with the rhythms of snooping about, an interplay of traditional piano, string and brass menace crossed with sometimes funky, electronic rhythm and a subtle electric guitar for the high-tech equipment that fills this living space. Shire gives the score a gripping feeling of melodic tension, with every cue neatly designed to build to the ultimate moment when the murderer will show up in person. Movie Score Media can be thanked for peering into Shire’s formidable repertoire to bring this impressive score to light again in the symphonically sumptuous album that shows just how grippingly good a musical remake can be.

Click on the link to Purchase the REAR WINDOW soundtrack