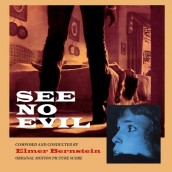 Elmer Bernstein gets a rare chance to view terror

Where Henry Mancini got to play blind woman’s bluff with Audrey Hepburn in WAIT UNTIL DARK with creeping restraint, composer Elmer Bernstein got to scare the already-gone sight out of Mia Farrow with way more symphonic lavishness in this 1971 thriller from BOSTON STRANGLER director Richard Fleischer, who opened up the basic girl-in-peril idea from a Manhattan apartment to an English home and its surrounding countryside – where nearly all of the occupants have gone lights out thanks to a cowboy-boot wearing killer. Where Bernstein was best known for intimate Hollywood dramas or period epics, the composer was equally adept at the horror genre when give the rare chance.

While he kicks up the groovy jams for SEE‘s source cues and gives sweeping string melody to its heroine, no more swaggeringly than during cues like “Home Ground” and “Idyll” that could have easily accompanied a horse galloping montage in TRUE GRIT (but somehow appropriate for a horse-riding heroine). SEE NO EVIL is equally notable for its eerie, yet emotional intimacy, sparkling pianos, tender bells and vulnerable strings playing as if the score for TO KILL A MOCKINGBIRD was suddenly thrust into a psychopath’s company. Bernstein springs brass shock effects on its terrified heroine with the best of them. The score’s retro appeal is abetted with fuzz guitar suspense and racing bongos the terror truly reaching frenzied proportions in cues like “Discovery” where staccato piano runs grow with rampaging brass adrenalin, or in an swirling “Escape” that would work just as well for a flight from a German prison camp. Sure Mancini may have been skulking about the dark, but it’s the sheer, alarmed craziness of Bernstein’s approach in between its tip-toe’ing that makes “See No Evil” so much boisterous fun. Once can only imagine how Bernstein might have scored a FRIDAY THE 13th movie had he be given the chance.

Click on the link to Purchase the SEE NO EVIL soundtrack