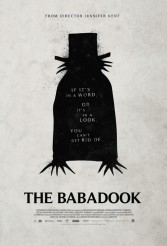 The stuff of nightmares 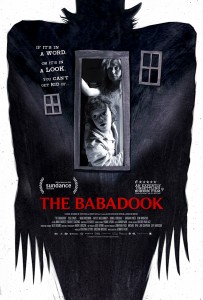 Writer/director Jennifer Kent’s film THE BABADOOK pulls off the harder-than-hell trick of keeping us guessing whether what we’re seeing is supernatural or psychological all the way through, without ever making us feel cheated. More, the filmmaker keeps us plenty scared throughout, using the kind of storybook imagery that leaves lifelong impressions.

Amelia (Essie Davis) is a single Australian mum who has it very rough. Her beloved husband died in a car crash when they were on the way to the hospital for Amelia to give birth to now six-year-old Samuel (Noah Wiseman). Samuel has a vivid imagination and a literally screaming need for attention at nearly all times. Between trying to care for her son and deal with her job as an attendant at a nursing home, Amelia is constantly worn out and overwhelmed.

Samuel is sure there’s a monster in the house; his preparations to battle it would be funny if they weren’t so dangerous. Amelia doesn’t know what to do about Samuel’s acting out. And then, one night, she agrees to let him pick out a bedtime story. Samuel chooses “The Babadook,” a pop-up storybook that Amelia doesn’t recognize, even though it’s right there on the bookshelf.

And what a storybook it is. Horror fans will at once want a copy and pretty much everyone will acknowledge that if ever there was a pop-up book that’s not for small children, this is the grand example. With dark imagery clearly inspired by the likes of 1920’s DR. JEKYLL AND MR. HYDE and 1922’s NOSFERATU, “The Babadook” introduces us to a creature that claims it wants to be friends, but hardly has friendly intentions. “Once you see its real face,” the book warns, “you’ll wish you were dead.”

Amelia is so stressed that it’s hard for her and for us to tell what’s actually happening and what’s her imagination, but in a way, it doesn’t matter. Samuel is quite sure there’s a Babadook that wants to get in, and the danger and dread mount with each incident, frightening us almost as much as it does the characters.

Horror is often used as a metaphor, but seldom as adroitly as it is here, to say nothing of the originality of the bottom line subject matter. We’ve all seen the one about the heroic mother in beautiful surroundings battling demonic forces, often calling upon outside help to do so. THE BABADOOK is something very different, a drama about a working-class mother with a problem child where a malevolent monster fits easily into the universe.

Kent has found two wonderful leads with Davis and Wiseman. Davis demonstrates her that she can play a truly wide range and Wiseman is able to go from adorable to terrifying with full conviction. Alex Juhasz deserves top accolades for book design and illustration.

THE BABADOOK will stick with you. It is brilliantly done, imaginative horror that grips us where most of us live.