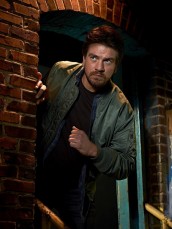 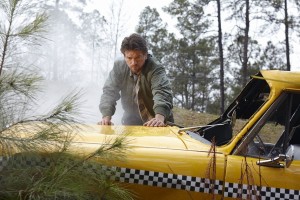 In NBC’s new Friday-night 10 PM series CONSTANTINE, based on DC Comics’ HELLBLAZER, the title character (Matt Ryan) battles demons in the hope of possibly saving his own soul. One of Constantine’s few allies is his friend Chas Chandler, played by Charles Halford.

Halford recently tangled with demons of a different sort as the unnerving Reggie Ledoux in TRUE DETECTIVE. The Utah-born actor has also appeared in features including DARLING COMPANION and FLUTTER and has had recurring roles on THE EVENT and AGENTS OF SHIELD.

At an event held by NBC for the Television Critics Association, Halford talks about what it takes to be the best bud of a cranky enemy of Hell’s minions.

CHARLES HALFORD: I play the character of Chas, who is John Constantine’s oldest and longest-surviving friend, seeing how [Constantine] has really bad luck with surviving friends. He is Constantine’s muscle and moral support and he also keeps him on track, because John is quite the reluctant hero. I mean, demon-fighting is not the funnest job in the world, so he’d probably rather not do it. But Chas understands that he has the ability to essentially save humanity from what’s coming, and he tries to stoke that fire and keep it going and keep him on track.

AX: Does Chas have any better idea of what’s coming than John does?

HALFORD: No. He just knows that it’s going to be a wild ride. Any day with John Constantine, you never know what’s going to come at you, so he knows it’s serious.

AX: How did you become involved in CONSTANTINE?

HALFORD: I had to go in and audition for it. I’d read the breakdown and read the pilot script, which I absolutely loved and was very excited about, but moreover, I’m six-and-a-half feet tall, so when I saw in the breakdown, outside of the character’s name being Chas and the property being something I was familiar with, the way he was described, something felt so right about it to me. I said, “This is really right for me.” And then the rest was just good fortune.

AX: At that time, were you familiar at all with the HELLBLAZER comics?

HALFORD: I was. Growing up, I was a fan of comic books and comic books of the darker ilk. I was a fan of BATMAN and I really enjoyed those comics, but HELLBLAZER was not something that was really accessible to me. It was for mature readers, and so when somebody would slip me a copy of HELLBLAZER, it was like a dirty little comic, and that was a lot of fun, but when this opportunity presented itself to me, I was familiar enough, and once I started reading it, I fell in love with it all over again for a whole slew of different reasons that I didn’t even understand when I was a child, [such as] how complex and human this character was. It wasn’t just bad language, gore and sex. He’s complex.

AX: Can you liken Chas to anybody, either like an undercover police officer, or an AA sponsor, or …?

HALFORD: I think Chas is your best friend, anybody’s best friend, a person who would do anything for Constantine. He’s a family man without a family, so to speak, and so Constantine is very much a long-lost brother, or a brother he never had. So I would say if you were to liken him to any type of character, it would be just a brother and best friend.

AX: Have you researched anything in order to play Chas?

HALFORD: Well, I’ve researched a lot of the comics. I’ve read most of the library of HELLBLAZER at this point. And growing up, I was sort of fascinated with the darker elements of things, [like] necromancy, and I was always drawing monsters and stuff when I was a kid, so I do have a pretty good working knowledge of the other realms of reality, if you want to call it that. So I’m digging more into that, but for the most part, I’m just sticking to the comics and the scripts and getting to know Matt and getting that chemistry down.

AX: What is that chemistry like? Constantine is, as they say, a smartass. Is Chas wounded by the smartass-ery, does it roll off him, or does Chas ever to out-smartass Constantine?

HALFORD: Yeah, I get to have some fun. I get to razz him quite a bit. You can’t just sit and be punched without punching back. But I think that he has grown some calluses to Constantine’s coarse behavior, and just coarse behavior in general. He’s very used to picking Constantine off a barroom floor and nursing him back to health, and there’s no doubt that Constantine makes Chas’ life infinitely harder than it has to be [laughs]. And so that’s going to wear on anybody. And yeah, he has his moments of outburst where he gets to throw a little bit back at him.

HALFORD: We’re shooting in Atlanta, Georgia, but I do believe we’ll be traveling around a little bit.

AX: How is it working there?

HALFORD: I like it. There are a lot of winding roads and a lot of cicadas and fireflies. Fireflies are awesome – I’d never seen fireflies before I got down there, so that was nice. Everybody’s been really nice, the food’s exceptional and the city’s very, very cool.

AX: How was TRUE DETECTIVE?

HALFORD: It was an awesome show and so that was a really great experience.

AX: Can you contrast the vibe between the two shows?

HALFORD: I think with TRUE DETECTIVE, it did deal with the occult and it dealt with some darker elements, but not so obviously as in CONSTANTINE. In CONSTANTINE, you actually get fleshy demons that are there to fight. But I think the notion of demons is very fascinating, because you look at TRUE DETECTIVE and there’s no doubt a darkness is there and they tease the supernatural elements, but when you have people making really horrible choices and hurting other humans, who’s to say that there’s not a darker power behind it? And so in that regard, they’re similar I think it’s just a lot more in your face in CONSTANTINE.

AX: Is there anything else you’d like to say about CONSTANTINE right now?

HALFORD: I just think it’s going to be a really, really great show and it’s barely scratching the surface of what’s going to be a huge supernatural DC universe. And I think it should be suspenseful and scary and funny and people should really to check us out. I’m just looking forward to taking this as far as we can take it.