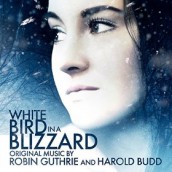 From “The Doom Generation” to SPLENDOR and KABOOM! Greg Araki’s films are Technicolor, sexed-up acid trips, full of bad behavior that can range from the hilarious to the disturbing – but never without empathy for his misfit characters. Two composers to particularly to get that vibe are Robin Guthrie and Harold Budd, who first teamed to give a beautiful, translucent synth-rock vibe to the surreal UFO imagery that hid two young men’s awful truth behind Araki’s MYSTERIOUS SKIN.

Now the filmmaker sends another teen on a hallucinatory vision question to find the WHITE BIRD IN A BLIZZARD, a caged bird that happens to be a daughter’s dissatisfied, and now disappeared suburban mother. Where Guthrie and Budd nailed a kind of retro sci-fi purple haze for MYSTERIOUS SKIN. WHITE BIRD‘s setting of the 80s allows them to spiritually get the guitar-synth doom groove of the decade, a proto-Goth music period that Cocteau Twins’ former guitarist Guthrie likely knows well. The result is long puffs of haunted, hallucinatory melodies that are things of ethereal beauty. As opposed to a more overtly traditional approach any other filmmaker or composer might have taken, Araki and his musicians play a smooth dream world of teen angst, with guitar-topped melodies capturing a feminine yearning that captures the weird transition between girl and woman, while a tender piano helps give lost humanity to an otherwise unsympathetic foreign hausfrau trapped in a suburb she never made. WHITE BIRD IN A BLIZZARD is alt. rock scoring at its most dreamily transcendent, a finally uplifting tone poem for coming of age that abets this film’s unique, unquantifiable vibe in a way that’s more like fantasy silk than pelting snow.