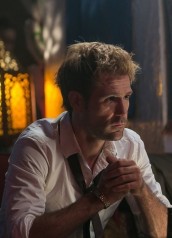 A really good, brutal episode as John must make a savage decision regarding an old friend 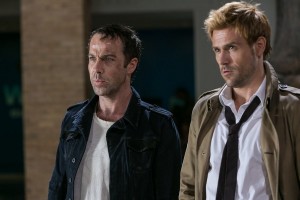 This was a brutal episode of CONSTANTINE.

And that’s a good thing. From start to finish this was, by far, the ugliest and horrific demon that John Constantine (Matt Ryan) has had to face so far on the NBC show.

“A Feast of Friends” is a fitting title because it goes to the core of what the episode was about. A former black arts student of Constantine shows up and is distraught because the errors of his ways have finally caught up to him as he accidently unleashed a Hunger Demon on the masses. A Hunger Demon is a nasty creature that takes possession of a human then gorges the human on food until it evacuates the person leaving them in a crumbled mess and a horde of bugs flies out and occupies another person. This continues forever unless Constantine can put a lid on it (literally).

What makes the episode special is that it does a great job in exploring the tumultuous relationship between Constantine and his former acolyte and that John has to make a savage decision at the end that puts a literal stake in the relationship forever. When I said it was a brutal episode it pays off in the end as Constantine must use his friend as a mason jar to contain the beast by putting all the bugs into him and then carving a containment spell into his flesh. But it only gets worse as his friend must then slowly die as the demon inside dies which takes numerous days.

The only problem with this episode was with how they handled Zed (Angelica Celaya) who becomes kind of entranced or mystified with John’s former prodigy and spends most, if not all, of the episode on a couch just kind of doing nothing. That’s fine if they don’t really have a place for her in an episode but hopefully in future episodes she will be back to being more part of the overall storyline.

While this continues the whole “demon of the week” episodes, “A Feast of Friends” shows that CONSTANTINE is going to take some chances and hopefully continue to be a brutal show that doesn’t have a problem showing gnarly things as they should be actually portrayed.