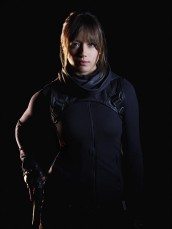 The actress talks being an 0-8-4 and Tweeting 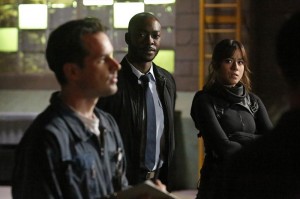 In Season 2 of MARVEL’S AGENTS OF SHIELD, ABC Tuesdays at 9 PM, there’s some new kind of havoc around every corner. Phil Coulson, played by Clark Gregg, was resurrected after his big-screen death in MARVEL’S THE AVENGERS, and is now running the beleaguered S.H.I.E.L.D. It turned out that one of Coulson’s trusted agents, Grant Ward, played by Brett Dalton, was really part of the fascistic Hydra organization. Worse, Ward has just escaped, but he remains entranced by Skye, played by Chloe Bennet.

Skye is Bennet’s first regular series role. When we met her character at the beginning of SHIELD’s first season, Skye was simply a rebellious young hacker, recruited by the organization for her technical skills. Since then, Skye has developed an almost daughterly relationship with Coulson, learned a lot of physical skills – and learned that she’s actually an 0-8-4, meaning that she is at least partly not human. Skye’s search for her parents has led her to discover that her father, played by Kyle MacLachlan, has an inhumanly homicidal temper, which is a profound disappointment to the young agent.

Bennet, however, seems like she couldn’t be in better spirits at a Twitter event for AGENTS OF SHIELD on the Disney lot sponsored by Disney and ABC. She wants to make sure that the assembled journalists know to talk to her new colleague, who plays Lance Hunter. “Have you guys met Nick Blood? You’re going to like him a lot.”

Sitting at an outdoor table, Bennet sets aside some of the secrecy surrounding SHIELD to talk about Skye in the second season.

AX: Are you enjoying the way Skye has been developing?

CHLOE BENNET: Yeah, who she was in the pilot and who she is now has just been a completely turned around. She’s still Skye and she’s still quirky and fun, but she’s a little more serious this year. She’s an 0-8-4 and an object of unknown origin, so now it’s not just who are my parents, it’s what am I? So it’s really been about that now.

AX: Did you know that Skye was partially not of this world when you got the part and you just kept it under wraps?

AX: What does knowing that Skye isn’t entirely human do for you as an actress?

BENNET: It makes it interesting, and she’s got this mentality that keeps her driven to find the answers, and that’s what’s kept her driven her whole life, is trying to find out answers. I don’t think that’s ever going to stop until she gets answers.

AX: Does playing someone who might be different on a species level change anything about how you play Skye?

BENNET: I don’t think it does. I’m not walking on my knees or all fours or speaking different languages here [laughs]. If I popped a tail, it would be weird and awesome, maybe.

AX: Now, since you’ve begun the show, have you refined any of the things that you needed to learn to do in terms of stunts?

BENNET: A lot more stunts have happened. She’s becoming more of a badass and she’s really finding her footing in terms of being active in combat.

AX: And how do you like working with J. August Richards, who plays Deathlok?

AX: In first season, it seemed like Iain de Caestecker’s character Fitz had a little bit of a crush on Skye. Was she aware of that?

BENNET: I think she [was] aware, but I think she [thought that it was] more cute than anything. In real life, me and Iain just [talk] with each other all the time. I love Iain. He’s awesome.

AX: Now, of course, everything is all over the map. Fitz is pining for Elizabeth Henstridge’s character Simmons, it seems like Skye and Simmons both kind of are interested in B.J. Britt’s character Triplett, Ward is still crazy about Skye, Skye is still enraged at Ward, Ward used to be messing around with Ming-Na Wen’s character May …

BENNET: Okay, that was because he knew he wouldn’t get attached to Melinda May. It wasn’t serious. No, but I think she does need some loving in her life. It wouldn’t be TV without some love triangles or rectangles.

AX: How is Skye processing being a motivating factor for Ward, someone who’s basically screwed over everyone she knows?

BENNET: Interesting question. Being the motivating factor – I think towards the end, it was the motivating factor and I think you’ll see that this season, Ward’s loyalty is really to Skye. In a weird way, it’s kind of sick and sweet and messed up a little bit, because he’s so deluded in his thinking.

AX: Do you think he killed his dog in the back story episode in Season 1?

BENNET: No. Oh, my God. I was reading it and texting [series co-creator/show runner] Maurissa Tancharoen – “You better not kill this dog.”

AX: ABC and Disney have hosted this Twitter premiere for AGENTS OF SHIELD, and a lot of the cast and writers live-Tweet as the episodes air. How do you enjoy that aspect of SHIELD?

BENNET: It’s so sweet. It’s awesome, it’s really cool. It’s wonderful to be able to speak to people who really love the show and instantly can tell you what they think about episodes and show their excitement over the new posters or show their excitement for the new stills. It just makes you feel a little bit more loved. Musicians go on stage every night, and they have these fans adore them and tell them that the music is great. We’re super-insecure as actors, so to get that validation from people instantly is really nice. Also, I was looking through physical fan mail the other day.

AX: In Season 1, when Coulson rescues Skye in the car Lola, how was that done?

BENNET: I can’t tell you. She does fly. I’m pretty sure it’s a green screen.

BENNET: I don’t think so. To me, she really flies.

AX: Skye is much more involved in the workings of S.H.I.E.L.D. now. Does she have some sort of a title now, or is she Agent Skye?

BENNET: She is Agent Skye. She’s a field agent now, which is really cool, and she’s been training with May, and she’s a little bit more badass. I think she literally drops into frame for the first episode [of Season 2]. What I love about the first episode is you see these characters that you know get into this routine that you’re not aware of, something that’s totally different from before, which is cool. It’s like, “Oh, God, these are the same characters, but they’re so different and we want to know more.”

AX: When CAPTAIN AMERICA: THE WINTER SOLDIER came out and then S.H.I.E.L.D. on the show was attacked by Hydra, all of a sudden, “Hail, Hydra” entered the cultural lexicon. Did you expect that to happen?

BENNET: Oh, yeah. No, I think I could have gone into a hole and I don’t think I would still have been removed from that. People still, to this day, come up to me – they walk past me in the grocery store, going, “SHIELD …” and then they’re gone and I say, “How did that happen?” [laughs].

BENNET: Yeah. It needs to be something with an S. “SHIELD survives.”