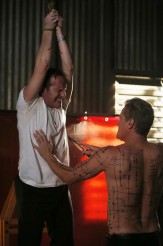 TV Review: MARVEL’S AGENTS OF SHIELD – Season 2 – “The Writing on the Wall”

Well, at least we don’t have to deal with this crazy alien stuff anymore right? Wrong. 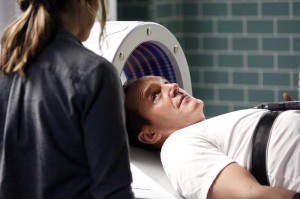 The point of “The Writing on the Wall” was to end the whole deal happening with Coulson (Clark Gregg) and his crazy visions of the alien diagram floating in his brain that may be a map or a schematic or whatever. Turns out, it is actually the diagram of a city. What city and where is still in question.

But in order to find this piece of information out, Coulson had to be tortured into remembering that he was part of the program that first used MARVEL’S AGENTS OF SHIELD as lab rats to be injected with the blood of the alien that we have seen in previous episodes. Of course, this was the same blood/serum stuff that not only save Coulson against his will after he died in THE AVENGERS but also save Skye (Chloe Bennet) after she was shot in the first season.

So we have to be introduced to a slew of meaningless characters that were given the blood/serum then went nuts, then had to go to Tahiti to get their memories replaced. All of these characters were dispatched by the guy we saw in the ending of last week’s episode that feels he needs to carve up their bodies in order to find the meaning behind the alien diagram. At the same time, Coulson is also having similar issues with control and his needing to draw the diagram is becoming a daily occurrence.

Turns out, one guy that got the Tahiti treatment figured out the whole diagram thing by building a train set for his son that is in 3-D. After seeing that the diagram is actually a city, Coulson and the crazy carver are instantly cured. And just like that, everything is good in the world of AOS.

Talk about anticlimactic, all this build up was for a city diagram? Couldn’t we have done this sooner without so much unneeded drama? [Editor’s Note: And these are supposedly brilliant super agents and hackers who couldn’t figure out the diagram was three-dimensional on their own?!?]

The only redeeming thing about “The Writing on the Wall” was the bit with Ward (Brett Dalton) where he is now again in the world but his motives are unclear. He first throws off Bobbi (Adrianne Palick) when she was trying to shadow him, then meets with Hydra only to kill them all and allow SHIELD to kidnap one of the bosses and loses all of the SHIELD agents, has a shave and is presumably after his brother.

Ward is definitely one of the most interesting aspects to the show right now and hopefully will end in some climatic way where Skye or Simmons (Elizabeth Henstridge) kill him.