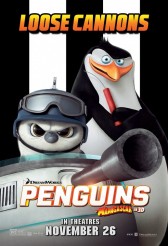 Briskly paced, amusing and often very cute, though with some questionable aspects 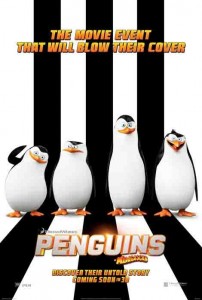 First introduced in 2005’s MADAGASCAR, continuing to steal scenes through two sequels and gaining their own TV show, the quartet of ever-caper-ready Antarctic flightless birds are now headlining their own 3D animated feature, PENGUINS OF MADAGASCAR. The results are usually deft, paced fast as coherence will allow and often very, very cute.

A prologue introduces us to penguin boss Skipper (voiced by Tom McGrath, who also directed and co-created the characters for the original MADAGASCAR and is one of the executive producers here), strategist Kowalski (voiced by Chris Miller) and demolitions expert Rico (voiced by Conrad Vernon, who directed MADAGASCAR 3) when the three are just chicks, though already determined to go their own way. The rescue an egg that hatches into the impossibly adorable and unquestioningly loyal Private (voiced by Chris Knights), which makes him part of the group, but also gives him permanent status as the “baby.” Nobody takes Private seriously; he’s too sweet-natured to ever get angry, but he does sometimes become disappointed that he’s more mascot than necessary.

If you guess that much of PENGUINS will revolve around Private proving himself, you’d be right, but thankfully, there’s not a lot of speechifying around it – Private gets his moment to shine, and does so, but he also can’t help his compulsive button-pushing, which has its problematic side.

The main thrust of PENGUINS involves our heroes trying to save penguinkind from the vengeful clutches of Dave (voiced by John Malkovich), who has a serious case of resentment against the species in general and Skipper’s group in particular. Hindering and helping by turns is a squad from the elite North Wind, headed up by Agent Classified (voiced by Benedict Cumberbatch), who is convinced that the penguins are amateurs.

There are good puns, bad puns, visual gags galore and moments of self-parody – baby Private is so fuzzy and lovable that the movie almost doubles back on itself. There’s much fun to be had here with penguins, octopi, theme music, jet packs and so on.

There is also, however, a bit of a weird message that may be unintentional. Let’s set aside for a moment that a juggling octopus would probably draw a bigger crowd than penguins. Dave’s dastardly scheme involves making his fellow beings ugly. This is presented here as a fate worse than death. It’s no fun to be unattractive, true, but indicating it’s the worst thing that could happen isn’t really something one hopes kids will take to heart. Before anyone brings up the crazy transformed Purple minions of DESPICABLE ME 2, the problem there wasn’t that the Minions were no longer cute – actually, they were hilarious-looking – but that they had become violent. Here it seems a matter of aesthetics.

Otherwise, though, the whole concept of mission-maddened penguins remains reliably funny and the snappy patter and pseudo-Bondian antics should work for audiences of all ages.