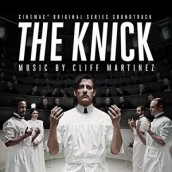 Where prolific filmmaker Steven Soderbergh has gone to Thomas Newman for the trippy ambience of SIDE EFFECTS, and David Holmes for the jazz groove of the OCEANS trilogy, Cliff Martinez continues to prove a reliable, experimental constant since director and composer made their indie bones on 1989s SEX, LIES AND VIDEOTAPE. Both have considerably broadened their repertoire from that ambient hip-hop score which redefined the look and sound of alternative cinema, their collaborations ranging from the enraged crime percussion of THE LIMEY to the modernistic orchestral score of SOLARIS and the retro-virus suspense of CONTAGION. But whatever approach he’s taken, Martinez’s voice has been an immediately, coolly identifiable one of pushing the tonal, propulsive with a hypnotic vibes of alternative scoring. One could definitely imagine hearing his hallucinatory, dusky sound in a contemporary cable hospital TV drama. But the idea of putting it into a show set in 1900 seems positively revolutionary – that is if you didn’t know Soderbergh and Martinez’s brilliant way of confounding expectations.

Cinemax, or Skinimax as it will forever be known, has been doing much to shed its softcore smut skin, even if such shows as STRIKE BACK and BANSHEE always had a way of throwing in multiple sex scenes so as not to lose that viewership. However, THE KNICK‘s idea of NC-17 is the hardcore surgery scene of the week, which does much to inform us of the show’s intellectual pedigree, one that uses particularly dark, atmospheric camerawork to fascinatingly shine the light on turn-of-the-century medicine. It’s as much haze from the early days of electricity, as it is the opium smoke used by Clive Owen’s magnificent bastard of a surgeon, who’s doing his best to pioneer the medicine of the future. He’s literally a cutting edge dope friend whose character gives you all you need to know about why Martinez’s anachronistic, electronics-heavy work is so revolutionarily here. Using the Calypso-like glass sound of the Crystal baschet that’s become a far less dated definer of his sound that the Ondes Martinot was to the likes of Elmer Bernstein and Maurice Jarre, Martinez creates a feeling of both medicine, and plot on the movie, surrounded by haunting, melodic drones. It’s an approach that likely makes a less Martinez-familiar viewer simultaneously think WTF as it pulls them completely into this hospital. Used in the show with a deliberately spare quality, Martinez’s music at times seems disconnected from the action on screen, much like doctors trying to keep their distance from the appalling cases they’re presented with, yet determined to seek some greater purpose. But then, subtly commenting on the action as opposed to directly playing it has been another powerful trademark of Martinez’s work, which sounds more like a cool computer bank here than ever before – a 70s analog synth sound amidst the emulated organs, chimes and dulcimers that capture the era’s still-classical spirit, if not to obvious effect.

What this well-chosen collection of tracks from THE KNICK‘s ten episodes (with another season thankfully coming) ultimately creates is melodically measured, almost intangible music that accentuates the uniqueness of the show above all, an almost transcendental, often beautifully sad meditation on visceral horrors it’s hard to believe that any hospital had to deal with, yet taking an approach that’s psychological as opposed to the physical. Martinez’s KNICK casts such a hypnotic lull that you can easily imagine its music being used as knockout gas of the coolest, comfortably numbing kind in a way that still keeps our attention rapt.

Click on the link to Purchase THE KNICK soundtrack