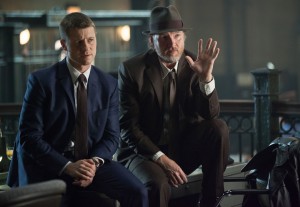 On Fox’s GOTHAM, Monday nights at 8 PM, we are in DC’s BATMAN universe. However, right now, Bruce Wayne (David Mazouz) is still a youth who is only beginning to contemplate how he may fight crime in the city of his birth. For now, trying to uphold the law falls to Gotham City police detective Jim Gordon (Ben McKenzie), an upright soul in the midst of profound corruption.

A prime – albeit likable – example of this corruption can be found right at Gordon’s side in the person of his police partner Harvey Bullock, played by Donal Logue. Harvey has seen it all, done most of it, and thinks that beating a suspect, taking bribes and looking the other way is often all in a day’s work. He also seems to have a possibly romantic past with Gotham crime boss Fish Mooney, who is played seductively by Jada Pinkett-Smith.

The Ottawa, Canada-born actor has been working nonstop for years now, appearing virtually simultaneously in either regular or arced roles on COPPER as an 1860s New York politician, VIKINGS as a ruler in ancient Scandinavia, SONS OF ANARCHY as a gang leader and LAW & ORDER: SVU as an NYPD police lieutenant. Back in 2010, Logue also starred in the much-lauded though short-lived FX series TERRIERS as Hank Dolworth, an unlicensed private eye who had previously been a cop, with a background that sounded something like Bullock’s.

Logue is part of a Q&A panel that Fox holds for GOTHAM and the Television Critics Association. When the panel ends, Logue remains for a follow-up chat with a small group of reporters.

ASSIGNMENT X: Did you imagine before GOTHAM came to you as a project that you’d find a character this complex within the realm of a comic adaptation?

DONAL LOGUE: I always did. Comics became a deeper literary form. I don’t know how to describe this. It’s interesting, because years ago, when I was at MTV, for instance, they didn’t want to do a movie about a character I created who I found very interesting, because they said, “It’s not as complex as talking cockroaches [which MTV was doing a musical about at the time].” Any time you find a person, anywhere, there is complexity. So I knew, especially because of the kind of noir-ish world, that it was very complicated, and I knew that certainly BATMAN has become kind of a new [source of drama]. Just in the last ten or fifteen years, I think, comics and graphic novels have taken their place as a legitimate art form, and absolutely you can find those levels of complexity.

AX: Do you think Harvey Bullock, if he left the force, could in some ways become Hank Dolworth in TERRIERS? Do you see a through-line between those characters?

LOGUE: I always see that. In fact, we were talking about discovering in future episodes what it was exactly that may have happened to Harvey. Some of it’s cumulative and some of it is specific, and I thought, “Wow, how similar to what happened to Hank Dolworth in TERRIERS.” The broken man – maybe it’s been explored a lot, but to me, the human psyche is always endlessly fascinating and a billion stories can spring from it. That’s why I’m always surprised by the, “How can you do a superhero thing without a superhero?” . But it keeps coming back with this. It seems to me it doesn’t matter whether it’s Mark Twain or whether it’s CHINATOWN – whatever the story is, any time it’s the human drama writ large, there’s a million stories to tell.

AX: Do you Harvey started out less jaded than we see him now?

LOGUE: Absolutely, he wasn’t jaded. It’s funny, because friends of mine who’ve worked in government, friends of mine who’ve worked in diplomacy, even guys who’ve worked in the military, they’re like, “When you float into the real world, I don’t mean to say you get – ‘jaded’ might not be the right word, it’s just you can get deeply involved in some charity and find out everything you’ve been giving that goes to Somalia gets immediately taken off the ship by warlords, taken and sold.” You know what I mean? So the world is a gritty place and Gotham is a gritty place.

AX: When do you think Harvey become Jada’d?

LOGUE: I’m just finding out, but to me, that was one of the best parts of the pilot, was reading that he walks in and immediately it’s a smooch with [Pinkett-Smith’s character] – whoa. For Jim Gordon to look at this world with this Eskimo leading him, this Harvey Bullock, to me, it’s fascinating, that crossing over.

AX: There’s another scene in the pilot where Harvey Bullock and Jim Gordon are hanging upside-down. Can you talk about filming that?

LOGUE: That was an interesting scene to film, because it was actually in a working warehouse location, so it was hard to find time [to shoot] between the actual guys unloading trucks and stuff like that, but we had a good day in that location. We were hanging upside-down for awhile – it’s harder than I thought.

AX: When you’re hanging upside-down, does that do anything to or for your acting process?

LOGUE: Absolutely. Any time there’s something really happening, like pressure in your head or something.

AX: Where does GOTHAM shoot?

AX: Do you see any difference between GOTHAM and your other recent projects?

LOGUE: It’s been an incredibly fun ride. For me, the biggest shift with this – and I wouldn’t say much of a shift, but coming from COPPER, VIKINGS, SONS OF ANARCHY, maybe even LAW & ORDER [SVU], things that are pretty visceral and also in their time and space very real-world, it’s just that – there was a question earlier about violence, and what’s interesting to me is, we have to step back in the violence, compared to the violence of VIKINGS or things that I’ve been doing. So to me, I thought, “This is theatrical, and it’s shaded with some color.” And in a way, I’m trying to adjust to how to get to the nonviolent world in which I live in GOTHAM in a way.

AX: You have a heavy theatre background, but when you started in film and television, you began doing primarily comedy, then went into hardcore drama. Was that a conscious decision?

LOGUE: Yeah. A couple of things, and it makes utter sense. It’s like, when I started doing theatre, I would say, “You’re doing a Joe Orton play and then you’re doing a Sam Shepard play next.” And when I first moved to Los Angeles and people would say, “Do you do comedy or drama?”, you’d say, “I guess” to both. “Well, you better choose.” And then what happens is, I’d done these improv comedy bits for MTV, and that puts you on the map as a comic performer, and so any jobs that are coming your way come through that siphon, and then you start doing them, and then you’re established as a guy who does comedy. So to me, coming up as a theatre actor or whatever, I was always surprised [by the reaction when actors changed genres]. Knowing people like Bryan Cranston, people like that, you’re like, “Of course those guys could do that thing.” It’s harder for the broader world to understand that that’s what we do, but when Bryan Cranston or Michael Chiklis were given the chance to do what they did, look at what you can produce. For some reason, I just found it really fulfilling in the last four or five years to delve into more dramatic territory.

AX: Are you enjoying being part of the DC Comics universe?

LOGUE: Absolutely. It’s huge – yes, it is special. I’ve never been on a show before that carried so much provenance coming in, that just the word GOTHAM – you know, you think about something like TERRIERS, you’re trying to invent sui generis out of nothing. You hope people will find something about it and grip onto it. Here, they’ve had that. They’ve built that up worldwide already. So there’s a responsibility to joining the DC world. I’ve gotten kind of close to [DC Comics Chief Creative Officer] Geoff Johns, who’s an amazing guy, very generous artistically and otherwise, so it’s been fun. I’ve worked for Marvel a few times, which was fun as well. I think I know comic books a bit, but I’ve never been some kind of diehard intellectual defender of comic book worlds, or what the differences between the two worlds [DC and Marvel] are. I’ve had a good experience with both.