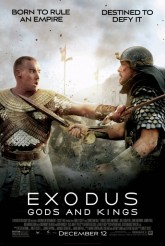 Lots of stirring and troubling spectacle, but not really emotionally effective 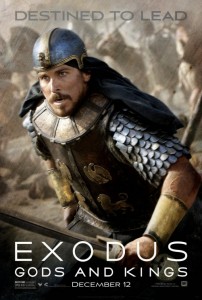 The story of Moses leading the Jews of out slavery in Egypt is one of the better-known tales throughout the world. It’s central to Jewish and Christian Biblical lore, and chances are good that even people who practice other faiths or are not religious at all have heard some version of it.

Now director Ridley Scott, with a quartet of screenwriters (Adam Cooper & Bill Collage and Jeffrey Caine and Steven Zaillian), has tackled it in EXODUS: GODS AND KINGS. The results are ambitious and spectacular, but strangely not that emotionally involving. We’re horrified by the deaths of the first-born, often stunned at the level of catastrophe and sometimes grossed out by the various plagues, but we never feel a sense of empathy with either Moses (Christian Bale) or Ramses (Joel Edgerton).

This may be because Scott et al seem to be trying to have things several ways. On the one hand, they want to show Moses as a man of good conscience, trying to realistically deal with some overwhelming situations. On another hand, they want us to wonder as to whether Moses is actually hearing the word of God – whom he and only he sees/hears as a young, English-accented boy – or suffering from hallucinations brought on by a head injury; this aspect of the movie has apparently upset some religious groups. It’s hard to know exactly how we’re meant to view this, because even though one of Moses’ followers (Aaron Paul) sees what looks to him like Moses talking to himself, nobody really questions the man’s leadership credentials. Then there’s Moses arguing with God, but not being able to take action when they disagree. Moses objects to God’s plans as inhumane, but doesn’t walk off the job, nor does he question himself for staying, so it’s not much of a protest, and the movie isn’t nuanced enough to follow up on this in any way.

Likewise, when Moses doesn’t actually believe he is Jewish – we don’t see the baby in the bulrushes part of the story, so we don’t know either – it sets up the potential for something intriguing. This doesn’t really pay off, save for one intense scene with Ramses, which is a standout for Edgerton. Soon enough, Moses accepts the story of his birth and what could have led somewhere psychologically interesting gets absorbed by what’s around it.

Much is made of the romance between Moses and his eventual wife Zipporah (Maria Valverde) and this section is surprisingly charming; the wedding vows are worth remembering. Valverde also has the distinction of being one of the few people onscreen here who look plausibly Middle Eastern. The fact that almost everyone in the cast is Caucasian is duly noted, but this review otherwise leaves discussion of the implications to elsewhere on the Web.

The spectacle is unimpeachable – this is Ridley Scott, a visual master, and some sequences are jaw-dropping in their scope. The way the plagues lead into one another has ecological common sense, as well as horror and misery. The 3D, alas, has the unfortunate tendency to make whatever is at the rear of the shots look like an unreal background that doesn’t share the vitality of the foreground.

Bale gives a perfectly good but not engaging performance as Moses; this man leads by strength, not warmth. John Turturro has some good moments as the dying Pharaoh.

EXODUS: GODS AND KINGS has a few surprises along the way, but mostly its creators seem to falter whenever they’re on the brink of doing something truly different. It primarily seems to exist to host its excellent action sequences. Mainly, it’s what most of us would expect, for better and worse.