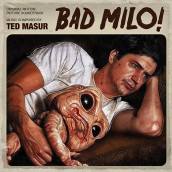 Ted Masur is an ass clown in the truest sense of the world with a memorable physical soundtrack debut that poops out his delightfully twisted score for BAD MILO about a monster that emerges from a nebbish’s butt to unleash hell on his master’s tormentors. Packed with devilish fury and eccentricity to spare, Masur’s music is a clever delight as it not only goes rampaging about in Elfman-esque fashion, but channels horror-indie energy into a uniquely comic sound that would be perfect for some Mike Judge movie down the line. There’s lunacy to spare in the off-kilter clocks of a “Firing Montage” to hilariously embodying the awful straining that produces “Meet Milo. And when it comes to the year’s best cue ever with “Myth of the Anus,” Masur uses with a cimbalom-like effect that might make you think you’re hearing the score to an absurdist werewolf movie, a diagnosis that that eerie violin of “Doctor’s Orders” only confirms.

It’s all part of an amazingly successfully tightrope act as Masur walks the very, very fine line between cartoonish comedy and serious menace, often at the same time. It’s an attitude that also makes the movie’s one-joke, Troma-ready premise wildly better than any viewer or listener could possibly expect. Masur uses his limited musical means especially well with a wistfully poignant sense of child-like melody, a clanking xylophone and forlorn whistling giving us real sympathy for the little butt-devil, who nonetheless relishes in grand strains of swirling, nicely thematic horror action that ballsily goes for broke with raging chorus at its movement’s climax. At the least, BAD MILO has the best music ever written for a bloodthirsty hemorrhoid in the history of cinema. And what composer can make that claim?