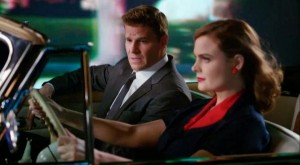 Not too many scripted TV series (outside of soaps) make it to two hundred episodes. BONES is one of the fortunate – and deserving – few. The series chooses to celebrate this milestone with “The 200th in the 10th,” an episode written by executive producer Stephen Nathan, directed by leading man David Boreanaz, and set outside the known BONES universe.

In fact, “The 200th in the 10th” starts with black and white newsreel footage of actors Emily Deschanel and David Boreanaz as alternate universe versions of themselves, turning up at the ‘50s premiere of what’s billed as their tenth film in ten years, entitled “Bones.” We follow them into the theatre, where the screen within shows the “movie” in what’s meant to be glorious Technicolor.

In the movie, the main characters, with the exception of Tamara Taylor’s usually upright Camille Saroyan, have their regular names, but different professions. Boreanaz’s Seeley Booth is now a Robin Hood-like jewel thief, Deschanel’s Brennan is a police officer out to prove that Booth didn’t murder a wealthy woman, Michaela Conlin’s Angela works in the police department steno pool and TJ Thyne’s Hodgins is now a paleontologist.

From this unlikely set-up, Nathan’s teleplay still manages to get a regular BONES plot going, an entertaining feat in itself. It’s also a lot of fun to see how recurring cast members are used, with Ryan O’Neal still as Brennan’s dad, but now chief of the LAPD rather than a con man. Billy F. Gibbons, who usually plays Angela’s father, lays down a few guitar licks as Booth’s old Army buddy Sarge and Laura Spencer, who is usually cast as a new lab assistant, here lets loose as a sultry lounge singer. Regular Taylor is a hoot with an uncharacteristic East Coast accent and a tough dame attitude.

Boreanaz as a director has a lot of sharp, amusing shots that are appropriate to the period and style, including blazing bright colors and process shots whenever anybody is in a moving vehicle.

This is by no means a regular episode of BONES, but it looks to be a labor of love for its makers, and it’s a load of fun for viewers ready to see something very different and playful for one week.