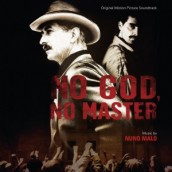 Nuno Malo's no anarchist when it comes to sweepingly sad melody

The anarchist movement in the early 1900s and the mass deportations its bomb-planting extremists inspired remain obscure, in spite of their lessons being more relevant today than ever in a society willing to do anything to stop terrorists in their midst. It’s a tragic, dramatic importance that infuses this historical drama, whose ambitious scope is given immense, tragic power by Nuno Malo’s score. With a sweeping, symphonic talent that actually made us musically believe in THE CELESTINE PROPHECY, the Portuguese composer take on affecting images of poverty-oppressed Italian immigrants struggling, some violently, for a new life in a land that’s not so free. While this movie might not exactly have the budget to equal THE GODFATHRE 2‘s extra-filled tenements, Malo’s beautiful, elegiac theme nicely captures a neo-Italian, operatic sense of fate that Nino Rota’s “Godfather” scores did so iconically.

Malo does an exceptional job of varying his own theme with more contemporary samples to give impact to its tale of David Strathairn’s straight arrow, sympathetic agent on the trail of the bombers, whose investigation leads to the not-so savory tactics of his superiors, including one J. Edgar Hoover. It’s am empathy for the unwashed immigrant underdog that suffuses the score of NO GOD, NO MASTER from poignant violin solos to optimistic melody for the American Dream, which is tread under heel as Malo’s theme turns to dark, marching outrage. Yet the tone of NO GOD, NO MASTER is more inviting than crushing, thanks to the often visually bright direction of Terry Green, whose decision not to go for the fatalistically grim period vision is a relief, as we brilliantly have more than enough of that already with the similarly set BOARDWALK EMPIRE and THE KNICK. Another unexpected dimension is this film’s telling of the Sacco and Vanzetti story, last dramatized by Hollywood in a still unavailable 1971 movie scored by Ennio Morricone. That composer’s talent for longing string and piano melodies also suffuses Malo’s approach in representing the characters’ nobility and unjust fate, which is no more tragic than when a Latin chorus takes up his theme to movingly close the film’s moving take on the still unending clash between radicalism and law and order run amuck. Released as a limited edition CD by Varese Sarabande (along with the worthwhile scores of Elia Cmiral’s WICKED BLOOD and Reinhold Heil’s HAUNT), NO GOD, NO MASTER shows Nuno Malo as no melodic anarchist when it comes to impressively thematic, symphonic scoring, while giving true, incredibly poignant heart to a smaller, human story swept aside by history.

Click on the link to Purchase the NO GOD, NO MASTER soundtrack