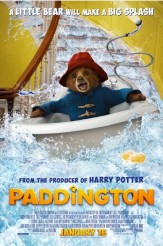 An English children’s tale with a superior CGI bear

PADDINGTON, based on the beloved illustrated children’s book series by Michael Bond about a young and very civilized bear from deepest Peru who comes to live in London, is the kind of movie that could have been made at almost any time in film history. It is has slapstick and a few gross moments, but it’s mostly gentle and pleasant, with a kind of ‘60s sensibility. The only thing that marks it as a contemporary product is the rendering of its hero, whose soft, ever-ruffling fur and soulful gaze bespeak the very latest artistry in VFX.

In a prologue, a human explorer from London comes to deepest Peru and becomes a friend to bears when he meets Pastuzo (voiced by Michael Gambon) and Lucy (voiced by Imelda Staunton), who rapidly learn to speak English and make marmalade. The explorer suggests they look him up should they ever come to London.

Fifty years later, Pastuzo and Lucy have their nephew (Ben Whishaw) living with them. After a disaster, Lucy thinks it best that the nephew go to London. Having heard tales of English children being sent by railway to the countryside during the Blitz and given homes, aunt and nephew think that all he needs to do is show up at a train station with a sign around his neck saying, “Please look after this bear. Thank you.” The rest will surely take care of itself.

At London’s Paddington Station, this turns out not to be the case. The little bear is nonetheless brought home for the night by kindly Mrs. Brown (Sally Hawkins), to the delight of her son Jonathan (Samuel Roslin) and horror of husband Mr. Brown (Hugh Bonneville) and daughter Judy (Madeleine Harris). Due to cultural mix-ups and innate clumsiness, Paddington, as he is dubbed by the Browns, unwittingly makes a mess, but he also becomes a local hero. The Browns try to help Paddington find the explorer, who they think will take him in, at the same time that the bear attracts the unwholesome and obsessive attention of a museum taxidermist (Nicole Kidman).

Kidman turns out to be splendid if surprising casting as the villain of the piece, using her feminine wiles on the Browns’ helpless, clueless neighbor (Peter Capaldi). What she plans to do to Paddington, albeit all ends happily, may scare little ones, so parents should be prepared to discuss any questions afterward.

Otherwise, there’s a leisurely, tea-time feel here, even though there are comedic action sequences. There’s one very odd sequence where Mr. Brown is forced to dress up as a female secretary and suffer the advances of a male staffer that seems to have actually been made five or six decades ago, since nothing this simultaneously tame and tasteless has been in fashion since.

Hawkins is radiant in her warmth as Mrs. Brown and Bonneville is game as her now-stern spouse. Whishaw is very sweet as Paddington’s voice.

PADDINGTON is more than a little retro, but its eponymous hero is a worth a look.