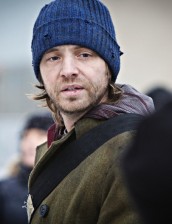 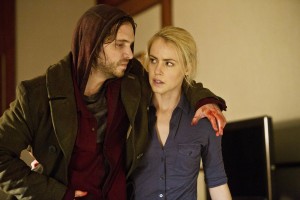 The original 12 MONKEYS was a bit of an odd duck when it came to science fiction movies. Made in 1995, it involved a bleak view of the future where a virus of some sort had wiped out the human race and only a handful of people left remaining survive in terrible conditions barely getting by.

Somehow, these few people managed to craft a way to send people back in the past in order to somehow learn the reason for the virus outbreak and stop it before it happens. But the time traveling aspect wasn’t fun and it took a gnarly toll on the people sent back in terms of memory loss and just being generally painful. It also featured a breakout performance from Brad Pitt and a depressing Bruce Willis conformed to the idea he will forever live two lives of traveling back to a time where things were plentiful and back to his real time where everything is terrible.

The season premiere of 12 MONKEYS, entitle “Splinter,” does a pretty good job of summarizing the movie of the same name with Cole (Aaron Stanford) traveling back in time to find someone they think is responsible for the virus outbreak. In order to find that person, he gets in contact with Cassandra Railly (Amanda Schull) and over the course of two years in two appearances convinces her that he is not only a time traveler but his mission is of global importance.

Luckily, in the two years between the first time she met Cole (now in 2015), Cassandra has enlisted the help of another guy to help track the guy down. For Cole, the trip was instant and he has little to reflect and wants to go after him right away. Cassandra wants answers naturally and after some supposition about what we already know (the virus, the global outbreak, bleak future, time traveling capabilities).

Flash forward to finding the guy, who happens to be the CEO of some drug maker creating a super virus, and he tells Cole not only has he met him before back in the 80s but at that time he was asking about the Army of the 12 Monkeys and more. This is all news to Cole, as he had never met the guy before – well, to him. We have almost a reverse time travel paradox thing going on similar to what happened in DOCTOR WHO with The Doctor and River.

Cole had explained to Cassandra that once he completes his mission, which involves killing the CEO, he should cease to exist, as the future should be changed and he won’t be there to have ever been sent back. But after he kills him, he doesn’t disappear and once he Splinters again (the phrase coined for blinking in and out of time) he finds himself again in the bleak future and he must take on a new task, finding the Army of the 12 Monkeys.

There is a lot that was going on in the opening episode but it was probably to get past the initial awkwardness of having to recap the film while setting the stage for a mythology that will carry the show forward. Probably in future episodes, it won’t be so fast and furious – which is too bad because it was quite enjoyable. But there is a lot that could be done here and at first when I thought about this series, I didn’t think there would be much they could tell different from the film. Hopefully, the series will continue to prove me wrong.