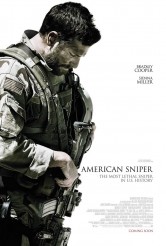 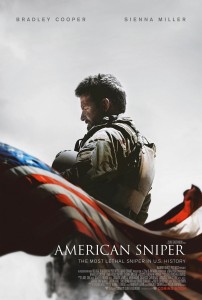 In AMERICAN SNIPER, Bradley Cooper portrays Chris Kyle, so far the deadliest sharpshooter in U.S. military history. As a Navy SEAL, Kyle made an estimated 160 kills in his four tours of duty in Iraq.

As a bare-bones premise, this could have gone any which way. Based on the book by the real Kyle with Scott McEwen & Jim DeFelice, Jason Hall’s screenplay gives us a protagonist who believes what he says when he tells people his entire interest in enlisting and remaining in the Navy is to protect his country and his fellow soldiers. However, being under fire, losing comrades and being confronted with unthinkable choices take their toll. At the same time, despite loving wife Taya (Sienna Miller) and two children, Kyle can barely function in civilian life.

As directed by Clint Eastwood, AMERICAN SNIPER has a matter of fact quality that serves it well. Rather than engaging in any kind of histrionics, Kyle as played by Cooper tends to retreat inward when he’s out of the intensity of the war zone. He doesn’t know how to accept the thanks of a man who’s life he saved, let alone talk to his wife.

AMERICAN SNIPER is relatively apolitical, though Kyle seems to make a connection between 9/11 and Iraq that is not questioned by the filmmakers. The movie takes the point of view of the SEALs, which is that they are in dangerous territory, tasked with ensuring the safety of other squads. Kyle’s impressive skill with a rifle soon gets him dubbed “the Legend” by his fellows. The filmmakers handle how this affects morale with deft nuance, so that we understand that the men around Kyle legitimately feel safer, without making us feel that they’re pushing too hard.

Eastwood makes us feel part of the action, so that we want to duck as the bullets and grenades fly. We empathize with Kyle’s silent pain at some of the truly awful decisions must make, and wind up with a measure of comprehension for the balance of dread and casual attitude required to function well under fire. The filmmakers find new ways to present the miseries of being caught up in deadly peril, with a sandstorm that may linger in nightmares.

The home front scenes don’t fare quite as well, not because Miller doesn’t do a good job as Taya – she does – but because they are repetitive. Also, while Taya has some reasonable expectations of marriage, because of the way her dialogue is written, she occasionally comes off as whiny.

Because so much time is spent with Kyle’s tours in Iraq, the concluding section of the film feels overly condensed; it seems like it could have benefited from some additional breathing room.

These complaints aside, AMERICAN SNIPER holds up as a movie that has something to say about the military experience, and says it effectively.