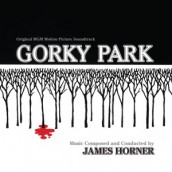 James Horner’s career was taking off in 1983, due to a dynamic signature sound that often meshed impactful percussion with richly thematic melodies that paid homage to such modern classical Russian masters as Prokofiev and Tchaikovsky. So it was fitting that Horner’s music would journey to their Motherland with GORKY PARK, its unique story (by NIGHTWINGS‘ killer bat author Martin Cruz Smith) pitting a Soviet cop against a murderous American capitalist pig, with furry sables as the MacGuffin behind a skinned face triple slaying. One need not dig far to turn up Horner’s usual, impactful suspects with a score that essentially takes the brassy jazz-pop beat of 48 HOURS San Francisco and gives it a suspenseful passport to Moscow, replacing urban rhythm with rich, cimbalom-balalaika strumming, Slavic bells and growling brass for pursuing suspects across the state, its relentless drive backed up with fever pitch electronics and an orchestra.

GORKY PARK has always stood as a landmark in Horner’s synth explorations, but on Intrada’s terrific release, the expansiveness of his instrumental layering is particularly astonishing at conveying foreign intrigue. GORKY richly contrasts its driving action with more subdued romantic mystery in his lovely, swelling theme for a beautiful dissident that of course will have a Communist cop questioning his value system. Her melancholy character infuses much of Horner’s oppressively exciting score, at last giving it a sweeping symphonic release from his musical Iron Curtain, as well as using a far happy variation as the little critters are set free from their cages. This was the score that set Horner up for the alternately pounding and piano-creeping spook house atmosphere of LV-426 in ALIENS and the Soviet men of action in RED HEAT and ENEMY AT THE GATES in particular among the many impressive Horner scores to follow, with the 79-minutes on this greatly expanded re-issue a copious amount of alternates, while also separating Horner’s ingenious segues from Tchaikovsky’s “Swan Lake” and the “1812 Overture” to his tingling suspect-tailing motif. It’s a major re-discovery of a seminal work that shows Horner working expertly on multiple dramatic levels, going into electronic and orchestral Iron Curtain with intense determination in a way that would make Russia sound both forbidden, and suspensefully intoxicating to a movie audiences’ Cold War ears.

Click on the link to Purchase the GORKY PARK soundtrack