Home » Supernatural review The Things We Left Behind Season 10 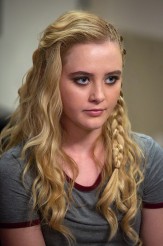 TV Review: SUPERNATURAL – Season 10 – “The Things We Leave Behind” 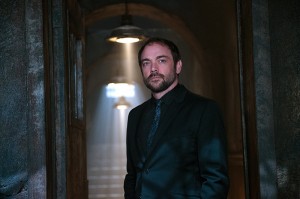 There’s a theme running through the SUPERNATURAL episode “The Things We Leave Behind.” Yes, the show often deals with family, but here it’s not just the Winchesters’ fraternal bond, but also their recollections of John, Castiel (Misha Collins) trying to cope with parental responsibility, and Crowley (Mark A. Sheppard) trying to wrap his head around having his mother Rowena (Ruth Connell) in his dungeon.

The episode begins ominously, with Dean (Jensen Ackles) in shock, surrounded by a ring of the corpses of men he’s killed. This is a nightmare – Dean wakes up, horrified.

It’s been a very long time since we’ve seen the family of Jimmy Novak, the human whose form Castiel inhabits. In fact, when we last saw Mrs. Novak and young daughter Claire, it was in “The Rapture” episode of SUPERNATURAL’s fourth season.

By now, Claire (Kathryn Love Newton) is a very angry teenager in a state-run home for minors who have no legal guardians. Inspired by fellow angel Hannah, who gave back her human body to its original owner, Castiel visits Claire. Castiel explains to Claire that Jimmy is in Heaven – when Castiel exploded at the end of Season 5, Jimmy died, and although Castiel was reassembled, Jimmy couldn’t come back. However, Cass wants to make sure Claire has anything and everything she needs.

Claire, with justification, blames Castiel for ruining her life. Her mother (who went through some pretty awful experiences, including being possessed by a demon) left to go “find herself,” so Claire was with her grandmother until the older woman passed away. When the state refuses to give Castiel (who’s pretending to be Jimmy) custody of Claire, the angel breaks the adolescent out.

Claire repays Castiel’s gesture by stealing his wallet and running back to small-time criminal Randy (Roark Critchlow), who has been sheltering Claire and her boyfriend. Randy has bad gambling debts and persuades Claire to rob a convenience store so he can pay his bookie.

Castiel, meanwhile, asks Dean (Jensen Ackles) and Sam (Jared Padalecki) for help in finding Claire. Although Dean at first thinks this is not something any of them should be doing, he comes around. The boys get drunk and talk about what kind of a father John was – protective but not concerned with being liked. The point they’re making is that even if Castiel doesn’t know what he’s doing with Claire, it’s important that he look out for her. Dean also asks Castiel to kill him if he loses control again when he thinks Sam isn’t listening.

The three of them track Claire back to Randy’s, where she is about to be raped by the bookie. Castiel and Sam get Claire out of the house, and the bad guys make the mistake of trying to stomp Dean. Dean’s nightmare comes true – he kills all of them and finds himself surrounded by a ring of dead humans (albeit ones who behave as badly as demons). Sam is understandably very worried by this turn of events.

In Hell, Crowley (Mark A. Sheppard) and his mom Rowena go over Crowley’s lousy childhood, starting with the fact that Rowena named him Fergus and going on to the time she tried to trade him for a few pigs before abandoning him entirely.  However, after Rowena persuades her dungeon cellmate to tell a lie that causes Crowley to execute his main lieutenant for treason, he decides to trust his mother. Uh-oh …

Seriously, with judgment this poor, how did Crowley ever make Crossroads Demon of the Month, let alone King of Hell? Then again, most people have mother issues that can easily cloud their thinking, even with parent/child relationships far less fraught than this one.

It may simply be losing track of plot twists – there have been a lot between the end of Season 5 and now – but it feels like the explanation of what happened to Jimmy is new. If so, kudos to the writing staff for finding a way of either making Castiel a hypocrite or having to return his current body to its original owner. Seeing what a mess Castiel made by taking Jimmy feels about right, especially with SUPERNATURAL’s guiding ethos that when something looks bad, whether done in the name of righteousness or evil, it usually turns out terrible.

As for Dean wanting Castiel to kill him because of the Mark of Cain acting up, cue the angst. It seems likely the boys will need Crowley’s aid before all is said and done, and with Rowena in the mix, who knows where it’s going to lead.

“The Things We Leave Behind” doesn’t bash us over the head with its parenting parallels; they’re clear enough and weave together very well. It’s a theme that works and propels rather than impedes the storytelling.