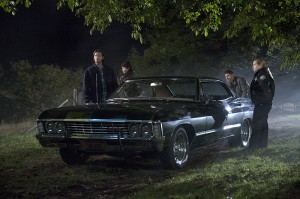 SUPERNATURAL is clearly revving its mythology motor, ready to do some big stuff with Dean (Jensen Ackles) and the Mark of Cain he still bears. However, since this is a broadcast series with twenty-two episodes a season, it’s natural that sometimes the show falls back on monster of the week stories, which is fair enough – it’s how SUPERNATURAL started out, after all.

“Hibbing 911” has a couple of good twists, plus some familiar faces, all of which make it solid if unexceptional. The boys’ (and the late Bobby’s) old pal Sheriff Jody Mills (Kim Rhodes) is reluctantly attending a sheriffs’ convention in Hibbing, MN. Jody is even more perturbed when she’s forced to pair up with overly cheerful Sheriff Donna Hanscum (Briana Buckmaster).

Things look up a bit for Jody when she learns of some mysterious animal attacks in the area, where human bodies are found almost entirely stripped of flesh. This is clearly a job for the Winchesters, so Jody calls them. Dean is delighted to do anything other than continue his so-far fruitless research into the Mark. When the brothers arrive in Hibbing, they are shocked to recognize Donna, who was present when they found demons running a fat farm. Donna stayed in the dark that time, and the boys and Jody would like to keep her that way, but Donna sees local Sheriff Cuse (Fred Ewanuick) standing over a bloody corpse with his fangs showing.

When Donna shares this information with Jody, Jody brings Sam (Jared Padalecki) and Dean back to hear the story. Donna gets told about monsters and the four of them track down Sheriff Cuse – who tells them to run. It’s too late: Sam, Dean, Jody and Donna are all captured by a pack of vampires led by young-looking Starr (Morgan Taylor Campbell). A few decades back, Cuse had sired and mentored Starr, but he’s since renounced eating people. When Starr tries to force Cuse to kill this batch of humans, he refuses and she decapitates him. Our heroes break free and kill Starr and her minions.

Jody and Donna bond and Dean is happy that he feels back to normal again – despite the amount of blood he shed, he doesn’t believe the Mark is driving him.

There are a number of fun moments, such as Jody’s increasingly horrified reaction to Donna’s boorish ex-husband. Credit SUPERNATURAL for making “fat shaming” (for those unfamiliar with the term, it’s trying to make people ashamed of being overweight) totally uncool. The show still clearly hasn’t gotten out of its FARGO phase, as Buckmaster does her best upbeat, polite Frances McDormand riff. Recurring actress Rhodes continues to make Jody someone who is credible as a sheriff.

There’s a nice little myth switch here, with everyone being briefly thrown by the mostly devoured corpses – it turns out that, unlike most of their kindred, these vampires try not to waste any part of their victims. The boys get to show off their expertise and fighting chops here; we know they’ll best the bloodsuckers, but the direction is skillful enough to make us wonder exactly how this will happen.

“Hibbing 911” isn’t particularly imaginative, but it’s enjoyable and harks back to SUPERNATURAL’s early days in a respectful manner.