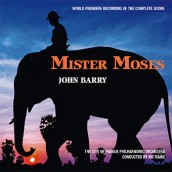 John Barry goes to Africa for the first time

After doing numerous re-performances of John Barry’s work through the years with LION IN THE WINTER, ROBIN AND MARIAN and an especially spectacular resurrection from the deep of RAISE THE TITANIC, the team of producer James Fitzpatrick, conductor Nic Raine and the now-stellar performers of The City of Prague Philharmonic take another trek with the composer’s sprit into what’s arguably his most successful continent. But where the themes for his furious jungle drumming, sweeping romance and brassy adventure of  ZULU and his Oscar-winning scores to BORN FREE and OUT OF AFRICA can be recalled by audiences the world over, 1965s MISTER MOSES is a score that’s essentially been in the dark continent of soundtrack obscurity, which makes their new Barry safari all the more thrilling.

Directed by THE POSEIDON ADVENTURE‘s Ronald Neame,MISTER MOSES starred Robert Mitchum as a n’er do well diamond smuggler who’s very reluctantly pressed into service as a would-be savior for an African tribe to relocate them from their homeland, which is about to be flooded for a dam – their journey led by an elephant named Emily and (of course) a beautiful missionary’s daughter. Despite their challenge, MISTER MOSES is a markedly more fun for Barry in its approach than the life-or-death challenge or raising an orphan lion club or guiding lovestruck Europeans to kill them. Led by the kind of rousingly repeated theme that the composer could write like no one else, Barry’s use of trumpeting brass is particularly appropriate for embodying the real, long-nosed star of the film, its pace led by native drum percussion. If anything, Barry’s rhythmic exotica even more authentic than BORN FREE and OUT OF AFRICA with its focus on a tribe, which Barry thankfully gets to play with more orchestral nobility than the thundering music for the “savages” in ZULU.Written the same year as THIUNDERBALL, MISTER MOSES  is given passages of string suspense and dynamic bursts of brass that fans of Barry’s James Bond classics will appreciate, while the younger set of the time no doubt delighted to the monkey shines of Barry’s more outrightly playful moments, especially in the higher, tree-climbing register of its wind instruments. But while the western-style orchestra is rousingly present in MISTER MOSES as Barry notes the highlights of the journey like the Tarzan movie he never got to score, what particularly impresses is just how native the composer went to mostly convey darkest Africa at its brightest.

The microphone placement and mixing of Fitzpatrick’s projects have gotten so good at this point that it would likely be impossible to tell the difference between MISTER MOSES‘ original (and lost) tracks the mixing of the orchestra keep Barry’s sound energetically fresh while sounding as nostalgic as a 1965 LP, as played through a particularly good hi-fi system would. Frank K. DeWald’s knowledgeable liner notes shed light on the movie that still hasn’t reached the DVD promised land, while the attractive, animal-filled graphic layout can be complemented for evoking the movie’s iconography without having any original key art available – a pitfall that many albums of this sort usually are unable to cross successfully.