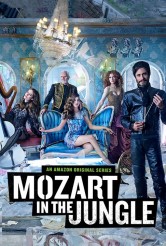 Based on the novel by Blair Tindall, MOZART IN THE JUNGLE is a comedy/drama about the world of a New York symphony orchestra. The series, which was made by Amazon Studios for Amazon Prime, debuted on the streaming service December 23. Gael Garcia Bernal stars as the symphony’s self-assured new conductor Rodrigo, Malcolm McDowell plays irascible former conductor Thomas, Saffron Burrows portrays commanding Cynthia and Lola Kirke is young, new-to-town oboist Hailey.

Paul Weitz, whose big-screen directing credits include AMERICAN PIE (with his brother Chris), ABOUT A BOY and ADMISSION, directed the MOZART pilot and has become an executive producer on the series. He talks about his work in conducting the show’s comedy.

ASSIGNMENT X: How did you become involved with MOZART IN THE JUNGLE?

PAUL WEITZ: I was friendly with [MOZART developers/executive producers] Jason [Schwartzman] and Roman [Coppola]. I’d done a cameo in a little film that Roman had produced prior to this, so they had my email address and they sent me their draft that they’d written with Alex Timbers, and I loved it. I had no intention necessarily of directing a pilot, or getting involved with a TV show, or anything like that, so it was pretty organic. Happily, Jason, Roman and I have been able to be very involved with the story as it’s being created, because we’re totally enjoying it, so it’s been a nice thing where we’ve been able to continue to hang out with each other and work on it.

AX: Normally, when you have extras, they’re either milling around or all doing the same thing. Here you’ve got background artists who are also actual orchestra performers. Do you work with them through their conductor the way you’d work with an interpreter?

WEITZ: Well, we cheated on the pilot – we had violin virtuoso Joshua Bell, who also conducts sometimes with the symphonies he plays with. So we actually cobbled together two orchestras, [who] were all excited to be playing with Joshua Bell, or to be sort of miming along. I think it weirded him out a little bit [to be] miming along to his own performance that he recorded in Sweden, I believe. So on stage, it was a little bit of a cacophony, but because we had him, I think everybody looked like they were [a real orchestra]. Everybody actually played those instruments and brought their own instruments and their own tuxedoes. So it was a logistical challenge.

AX: How do you think you’ll handle the orchestra scenes going forward?

WEITZ: Gosh, I wish we could book the New York Philharmonic every episode. But I think we’ll handle it similarly There will be more orchestra members introduced. One of the lovely things about the show is that one of the reasons that I got excited about getting involved is that my mother’s childhood friend was a woman named Orin O’Brien, who’s been with the New York Philharmonic for fifty years and was the first woman hired [by them] on a permanent basic. She was the daughter of the silent film star George O’Brien. I’ve heard for my whole life her talking about aspects of the Philharmonic, such as that there could be people sitting next to each other for twenty years playing with the Philharmonic and they haven’t talked to each other for the last twelve years. So there are a great number of characters inside the orchestra that can be exploited. So over the course of the season, we’ll be introducing a lot of other eccentric characters and then seeing how Hailey interacts with them. There’s also a whole interesting political aspect to who among the orchestra represents the orchestra and Saffron’s character will actually get to engage in some of the internal politics as they deal with management.

AX: Do you feel more affinity for the drama of the symphony, or the interpersonal drama of this young woman finding her way in a very competitive society, or the clash between Malcolm McDowell’s Thomas and Gael Garcia Bernal’s Rodrigo?

WEITZ: Kind of all of the above. The nice thing about a symphony is it’s a situation as in some families where people are forced to deal with each other, and where they have a shared love of music, but beyond that, they might share nothing. And they’re in the thick of it with each other. And that I love. I love the idea that in the same show, you can have a character like Gael’s character and like Lola’s character existing simultaneously and interacting with each other.

AX: Can you tease where the story may be going? Malcolm McDowell’s Thomas seems very antagonistic, but it’s not clear from the pilot what he can actually do with that antagonism.

WEITZ: He’s trying to figure that out during the course of the series. I think there’s a love/hate relationship between him and Gael’s character. They kind of need each other because, on an artistic level, it’s not that [Rodrigo] doesn’t respect [Thomas’] history as a conductor. They both have sizable egos, which defeat them in their relationship with each other essentially, because another thing that a musical director has to do is occasionally contend with massive donors and contend with the thought that, contrary to what they might have been told, there might be a gigantic deficit with our fictional New York symphony. And boy, would it be nice to have somebody who could do some of that work for you. But you just told that person that they’re outdated and that person. No matter the attempts at bonding, these two are at each other’s throats. So there are a lot of aspects that are not just purely creative ones that Rodrigo might not want to be dealing with.

There’s a culmination of Hailey trying to find her place in the orchestra and at the same time questioning whether she ever did make a choice to become a classical musician, or whether she just got applauded. That’s nice, because there’s a lot of turmoil involved in that.

AX: Have you done anything on this scale before, where you’ve got to deal with so many moving parts in front of the camera?

WEITZ: I feel like I have to a degree. I’ve been lucky enough to direct a whole bunch of films by now, and I was definitely using all the stuff I’d learned in order to be able to do this in the allotted time, but also, it sort of had to have a degree of gloss to it for that world to be realistic at all. As I mentioned, having Joshua Bell stepping in to do a cameo as himself and having access to that amazing world of New York musicians was certainly helpful.

AX: Are you learning anything new on this?

AX: Do you think anything of that is analogous to directing, as in, if you’re a director, you should have worked in some other discipline in film?

WEITZ: Yes, I think that is the case. I think you should at least be an aficionado of literature and acting and all sorts of things, and if one could possibly do it, get to do it every once in awhile, because it really sheds new light on stuff. That’s why if anybody ever foolishly asks me to do a little part in a movie, I’ll do it [laughs]. It doesn’t matter what it is. The actor sits in the trailer all day and then comes on and does their thing for five minutes, and you’d better give them love and attention while they’re doing it.

AX: Anything else you would like to say about MOZART IN THE JUNGLE?

WEITZ: Just that I think we were really fortunate to have this cast and to have Gael, who is so smart and funny and so knowledgeable about world musical culture.

This interview was conducted following a panel held by Amazon Studios for the Television Critics Association.