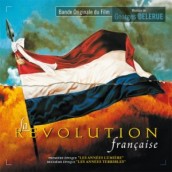 One can only imagine the honor for a French composer to score an epic based on the events that defined his country’s future, and for a small time the ideals of Liberté, Égalité and Fraternité. And it’s in that spirit one can understand the pure, gorgeous passion that Georges Delerue gave to THE FRENCH REVOLUTION. This massive, six-hour, two-part cinematic endeavor was done for the event’s 200th anniversary, starring the English-speaking likes of Jane Seymour, Peter Ustinov and Sam Neill, and ultimately turned into a TV miniseries that’s still unavailable on video in this country. Delerue had certainly done sweeping, historical orchestral scores before this, especially when it came to the excesses of English monarchy with A MAN FOR ALL SEASONS and ANNE OF THE THOUSAND DAYS. But given the chance to bring Versailles’ bourgeois class bloodily down unleashed a whole other level of epic majesty to his voice that will no doubt surprise his admirers – most of whom have never heard this legendary score due to excessive Ebay prices that would have sent CD gougers to the guillotine back in the day.

It’s a sense of importance heard in the choral “Hymne a la Liberte” that opened the REVOLUTIONS‘ two parts, the song piercingly performed as well by soprano Jessye Norman (that you’ll also hear the song “La Marseilles” is a given). Delerue’s unequalled, and utterly Gallic gift for romantic melody plays the elegance and rollicking, regal brass of the aristocracy, a magical tone (inflected by period music and instruments) of days that will never seemingly end as the poor starve outside the palace gates. With the more optimistic tone reserved for “The Light Years,” the storm of “The Terrible Years” arrives with powerful suspense and raging brass, the action becoming swashbuckling, and outrightly cliffhanging in tone, while low strings signal inevitable tragedy for both the aristocrats and freedom fighters who can’t imagine meeting the ultimate Monsieur, their march to awful destiny led by beating drums and darkly trumpeting brass. It’s tragedy that Delerue plays for all of its tearful, chorally solemn worth, yet in his inimitable way of turning sentiment into a work of moving, ultra-melodic art, as any American who cried through his wind and string scores for BEACHES and STEEL MAGNOLIAS in that especially rewarding year of 1989 can attest. For few composers wore their emotions on their sleeve as powerfully as Delerue, no more so than as characters’ neck cuffs were being undone with the rousing performance by the British Symphony Orchestra. It’s a bravura expression of the go-for-broke energy that Delerue gave to a project you can tell that he regarded as a personal milestone, which can now stand tall as one of his most impressive works thanks to Music Box Records two-CD release, whose powerhouse sound, nicely photogenic booklet and smart liner notes by Gergely Hubai also show it off as an honor for this French label to release. But at 1,500 copies of the finally complete score (whose previous releases somehow switched the stereo channels), it’s only a matter of time before those Ebay debauchers get this soundtrack back in their control, much in the same way the monarchy came rolling back into France. But in the meantime, viva la REVOLUTION a la Delerue at his most epically impassioned.

Click on the link to Purchase THE FRENCH REVOLUTION soundtrack