The Best Scores of 2014 The Year in Review

EXODUS leads off a wave of notable movie soundtracks

Scores like A.I. and I, ROBOT have portrayed automatons as having infinitely more soul than their human creators, a purity of electronic spirit that makes them closer to God than any flesh and blood creation. No score has religiously captured that spiritual ghost in the machine with the beautiful, beatific quality of Zacarias M. de la Riva, whose transcendent use of the chorus, and the anguished, spare strings of homo sapien despair merge for a moving requiem to the human race, while signaling the birth of a purer, spiritual society in his musical world building for this striking sci-fi indie from Spain.

In a year that’s seen a revisionist deluge of biblical films (none more so than the heathen experimentalism of Clint Mansell’s NOAH), Alberto Iglesias (along with fellow Spanish composer Federico Jusid (ISABEL) and Harry Gregson-Williams (KINGDOM OF HEAVEN) rides a wave both heavenly, and psychological that parts the Red Sea for Moses in EXODUS. It’s a score that powerfully taps into the ancient symphonic force of old school Hollywood scoring that befitted Elmer Bernstein’s THE TEN COMMANDMENTS, yet is modernized here with an intimate and epically propulsive manner that “Exodus” director Ridley Scott last drew from Hans Zimmer for GLADIATOR. And it’s likely that Alberto Iglesias will similarly arrive within at least-nomination foot of the burning Oscar bush for his stunning, all-enveloping score that not only achieves grand, melodic spectacle (its build to the big splash is especially spine-chilling in its symphonic majesty) but also plays the tragedy of two “brothers” rent asunder by a force beyond their reckoning, as well as the torment that comes from wreaking havoc while being on a mission from God. Iglesias’ talent for ethnically driven scores like the Academy-nominated “Constant Gardener” also lets him beautifully tap into a wellspring of ancient Egyptian and Hebraic music in a way that further pushes the studios’ new wave of putting earthy authenticity into the bible’s most spectacular stories, here paying off stupendously with a score that most importantly hears the troubling, and triumphant message between men and God.

Composer-led concerts have played a notable role in thrillers, from John Barry conducting DEADFALL to Lalo Schifrin opening RED DRAGON and most notoriously Bernard Herrmann waving on an assassin-cueing cymbal crash for Hitchcock’s remake of THE MAN WHO KNEW TOO MUCH. But no film has used this nifty gimmick as a central, film scoring coup de theatre like GRAND PIANO, which takes place entirely from the perspective of Elijah Wood’s classically traumatized pianist, whom a madman puts in the position of playing for his very life. Brilliantly synchronized to the character’s bravura movements, Reyes’ keyboard-and-symphony mash of every great concert piece from Beethoven to Mahler also has to pull double-duty as suspense score, hitting both the ivories with killer precision and the on, and off-stage cat-and-mouse game between psychopath and prodigy. It’s a score that’s all about sweat-flying control and structure, given the kind of furious melodies that one could easily imagine becoming concert favorites, especially when it comes to the most insanely rewarding piano solo yet heard on a score. One feels like jumping up and shouting “Bravo!” given the versatility of Reye’s convincingly classical work.

No Indian composer has brought together the musical flavors of East and West like A.R. Rahman, who brought home an Oscar for the hip-hop Raga rhythms of SLUMDOG MILLIONAIRE. But no score is literally indicative of Rahman’s good taste like this across-the-street duel between snooty French and earthy Indian cuisines, an ultimately affection battle that Rahman turns into a delicious masala of time-honored ethnic instruments and Gallic rhythms. Seasoned with percussive playfulness, ethereal romance and heartfelt drama that musically paints a picture as to how time-honored cuisines can be turned into something new and worthy of a musical Michelin Star.

If I didn’t have personal rule to only afford one best score per composer, Alexandre Desplat would certainly occupy several spots on this list for another year of exceptional work, particularly those soundtracks centering on World War 2. Where he infused the art geeks of THE MONUMENTS MEN with a comically marching, can-do attitude then gave a soaring spirit of nobility that allowed an athlete to soar above UNBROKEN‘s Japanese prison camp, the winner must go to the ever-flowing rhythmic masterworks that Desplat uses to drive the code-breaking Turing Machine. As France’s most notable melodist since the days of Delerue and Jarre, Desplat ones again weaves terrifically memorable and flowing themes that embody the precise calculations of a beautiful, tormented mind, while also cleverly emulating such mathematical modernist composers like Steve Reich and Philip Glass. Like Alan Turing’ creation that pre-figured computers, Desplat’s music calculates on several levels at once, conveying a desperately larger, ominous scope beyond a gear-filled room to give the suspenseful feeling of the free world at stake, while also outputting the wonders of puzzling out technological creation in a way that makes a withdrawn scientist, whom others think of as more machine than man, into a tragically poignant figure as noble as any hero on the battlefield. 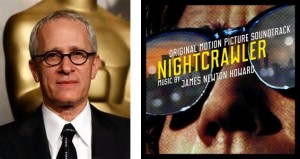 James Newton Howard used alternately rocking and ethereal electronics to convey Los Angeles as a cross-culture melting pot as capable of humanity as it was danger in his stylistically seminal music for 1991s GRAND CANYON. Now Howard fast forwards to his synth scoring’s next, disturbing evolution as orchestra combines with a hypnotic, industrially-tinged sound for a city gone soullessly dark in the face of a sensation-starved media beast that must be fed. Giving it a diet of car crashes and murder are pedal-to-metal percussive runs to the next crime scene, eerily beautiful washes of samples becoming the hypnotic pull of news cameras and LA neon to a hungry, camera-toting wolf – music that captures an empty, transfixed soul looking for meaning amidst the menacing, growling suspense of where he’ll find his next live-at-11 prey. Yet for a movie that’s the most caustic TV satire since NETWORK, Howard is sure to bring in a pokey, humorous theme that tells us everything that makes this psychotic Sammy run, often at top speed. As he finally bursts into twisted metal and groovy percussion for its end titles, Howard upends his GRAND CANYON riffs into the height of bleak, energetic irony for a musical city of red-splattered news footage night that’s truly lost any sense of hopeful vision the composer first imbued it with. 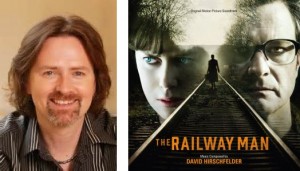 The power of awful memory comes flooding through David Hirschfelder’s impactful, movingly dramatic score as a British victim of Japan’s wartime, railway-building atrocities finds himself pulled back into a past he desperately tried to forget. The nightmares of nerve-crawling strings, body-pummeling Asian percussion and twisted sound masses come out of the worst real-life horror movie imaginable to create a pit of despair. Yet it’s in the pulling out of these awful memories to find an almost impossible-to-believe reconciliation with the enemy that is where this score’s power lies. Even the buried humanity from a former torturer comes into the present with tender flutes, met with an emotional return from his victim that’s heard as through a lush, noble orchestra and an elegiac theme, with a building, Latin chorus asking benediction for the plight of POWs that must never be forgotten. 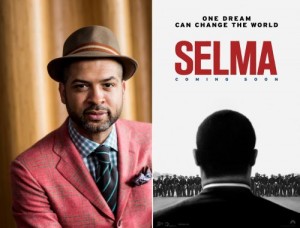 Sure SELMA is a movie that is “inspirational” to the core in every, outstanding respect, as you’d expect any film, or score to be about iconic, speechifying leaders from Abraham Lincoln to Mahatma Gandhi. But what makes this biopic of Martin Luther King’s finest hour truly soar is the beautiful subtlety with which those words come out, no more so than when accompanied by the moving notes Jason Moran, a jazzman making a stunning score debut here. Often played with spare, elegiac, and sometimes regretful melody for piano and strings, SELMA grows with the power of conviction, ultimately assuming tall orchestral stature when meeting its baton-holding haters at the height of non-violent nobility. With Moran’s equally understated use of Afro-centric melodies to personify the civil rights movement’s leaders, Moran knows when to deal his big musical cards for maximum, emotionally affecting impact during his memorably thematic marches. It’s a score that speaks softly, while knowing how to hold its heroic head high when faced with big sticks crashing down upon it, the score’s soulful eyes on the noble prize. 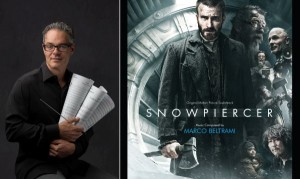 Marco Beltrami has proven himself to be a master of the musical apocalypse from the Straus-ian strains of KNOWING to the twisted rock guitar heralding WORLD WAR Z. But he’s never heard humanity’s end with she sheer invention of the perpetual motion train that throttles through the frozen, globe-spanning tracks of SNOWPIERCER. Musically embodying a twisted locomotive as the ultimate representation of class warfare, Beltrami unleashes a twisted score that’s powered with haunting themes for piano, anguished strings and axe-pummeling action, a tone that ranges from the impressionistic to the thunderously melodic as Beltrami delivers both tragic emotion and seemingly righteous payback. SNOWPIERCER is a gripping hell of a ride down the steerage class of what humanity’s last, tolling hour. 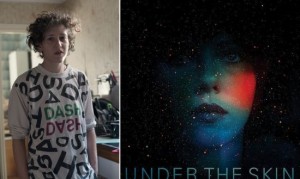 Mica Levy and UNDER THE SKIN soundtrack | ©2014 Milan Records

More than ever, it seems like every filmmaker is looking for a score that sounds like nothing else before it to suit their vision. “Under the Skin” fits matches that seemingly impossible request in the truest sense of just how bizarrely innovative “music” can be – if that’s what you can label Mica Levy’s skittering, droning, piercing and buzzing work of sonic anti-matter. If Voyager ever sent back the soundtrack of a movie made by aliens, the utterly unique UNDER THE SKIN would be it, which perfectly suits director Jonathan Glazer’s movie about an extra-terrestrial, fake flesh-covered seductress capturing her horny victims with cosmic tar, all while discovering some small amount of her own romantic humanity in the bargain. Yet within the terrifyingly strange noise-music that Levy conjures from God knows-what, the composer actually finds themes, and dare one say melody from this disturbing, transfixing mass of experimentalism. Easy soundtrack listening UNDER THE SKIN most certainly is not, but the daring will doubtlessly find themselves being pulled in by the oil-black sensuality that Levy’s exerts with the most innovatively weird score in memory.

Stay Tuned for: The Best Scores of 2014 – The Runners-Up and Composers To Watch

Article Source: Assignment X
Article: The Year in Review: The Best Scores of 2014