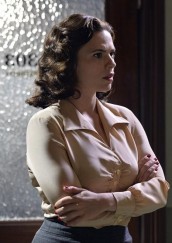 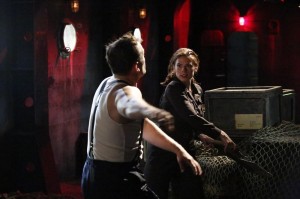 There is so much that I like about MARVEL’S AGENT CARTER that even some of the things I didn’t like about “Time & Tide” I can seem to look past.

First, let’s just get this out of the way that Hayley Atwell is one hell of an attractive British bird. And maybe more importantly she isn’t the typical female lead or female character you see on TV. She’s got curves for days, she doesn’t have a model look but it still crazy hot and is a damn fine actress. Her character of Agent Peggy Carter is also non-typical for network television. She’s smart, she’s cunning and, yes, she kicks some serious ass in every episode. ABC had another series a while back called ALIAS starring Jennifer Garner where she also was a non-typical female character that was attractive, very smart and kicked so much ass it was fun to watch. Here, Agent Carter is the same type but in terms of physical appearance is something that very few other shows would even think of having be the lead.

Secondly, where else would see a TV show that takes place in the mid-1940s and focuses on what’s going on in a post-World War II world? Nothing comes to mind because no one would really take the chance on it. Yes, this is a Marvel-based show so it gives it some credo from the beginning but without any of the typical heroes or villains in the Marvel Universe going to show up, the show is going to exist on its own original mythology.

That said, it is also refreshing that Marvel has this open sandbox to play in with this show. With some exceptions, there are not a whole hell of a lot of villains or heroes that exist in the Marvel Universe from the 1940s. There’s the Red Skull (presumed dead), The Invaders, Bucky (presumed dead) and Captain America (on ice at this point). There are others, obviously from the Golden Age of comics, but none are incredibly well known. It would be interesting if they would bring an Asgardian or someone like Namor to the show as they are immortal but that might be pushing it. And they could take the GOTHAM route in showing some of the origins of some of the Marvel older characters, but that might also be stretching it given the ages of the people involved in the Marvel Cinematic Universe.

So AGENT CARTER at its heart is an action crime drama that happens to include a lot of crazy gadgets and gizmos that come from the mind and pocketbook of Howard Stark.

In “Time & Tide” we find Agent Carter getting closer to finding the stolen technology of Howard Stark (which was one of the reason’s the Strategic Scientific Reserve (SSR) believes he was selling arms to the enemy) but when Jarvis (James D’Arcy) gets taken by the SSR and questioned after they found the bumper from Stark’s car in the factory explosion, she has to put it on hold in order to free him.

After she fakes being a bumbling woman and spills the beans about a stolen car, Jarvis is freed and Carter goes on the hunt again for the weapons. Luckily, they just happen to be waiting off-shore from Stark’s mansion about 100 feet away. This is one of the problems I had with “Time & Tide” that I mentioned at the beginning. Why would the technology only be in a boat a few hundred yards away? That makes no sense unless they wanted them to find it. And why was it only being guarded by one brute? Again, doesn’t make a lot of sense unless it is a set-up to another plotline.

While there is some intrigue involving the assassin that then killed the brute and one of the SSR agents and why he was following them to begin with (maybe again part of a set-up of some kind) but that hopefully will be fleshed out in future episodes.

AGENT CARTER is a fresh, unique show on TV and with some serious eye candy as the lead it makes for good television watching.