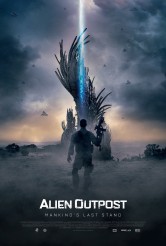 It’s hard to tell whether ALIEN OUTPOST is intended as a metaphor for how terrorist cells convert and/or conscript ordinary civilians to attack U.S. military outposts and how bad things can get when an installation is considered low-priority by the brass, or whether the filmmakers were consciously going for some traditional low-budget sci-fi movie concepts. For that matter, it’s hard to tell a lot of things about ALIEN OUTPOST, including the ostensible purpose of the title installation, aka Outpost 37 (the film’s original title).

Within ALIEN OUTPOST, it’s 2030. A decade earlier, Earth was invaded by an alien force popularly known as the Heavies. The worldwide military has managed to expel most of the extraterrestrials, but a few remain, terrorizing the human populace. The aliens have largely retreated to sparsely populated areas of the Middle East.

Two documentary videographers accompany some new recruits to Outpost 37, which has been built in tribal lands on the border of Pakistan and Afghanistan. When some previously friendly, or at least neutral, local villagers attack the base, the first thought is that their leaders are fed up with the outside military presence. But that’s not what’s really happening here.

Director Jabbar Raisani, a VFX artist making his feature directing debut here, co-wrote the screenplay with Blake Clifton. Raisani has a great feel for his actors. He also does a strong job of creating a persuasive mixture of camaraderie, boredom and tension for the characters stuck on this outpost in the middle of nowhere.

The “archive” footage here of the Heavies attacking cities looks fine, though the aliens themselves are a bit conventional as these types of cinematic beings go. Once we see what the soldiers are up against, we are distracted by questions. No matter how cynical the military higher-ups are, what was this understaffed, under-equipped outpost ever supposed to do in case of high-tech alien aggression? Given what the alien’s base looks like, how has it never been spotted/located before? (If the aliens have cloaking capabilities, this should have been made clearer.) Why is the outpost so close to a much larger military base, since it seems like that base can do everything the outpost does? Why are the aliens running around provoking the soldiers, since it seems the alien agenda would be better served by stealth?

We don’t get satisfying answers to these questions. Granted, the soldiers on the ground might not know, but since we’ve got the documentary-style overview, the format exists to address the issues. There are also moments where the film appears to depart from its documentary-style framework to become conventionally narrative, which raises more questions. If these scenes are part of the documentary, we should know where the camera operator is in terms of the action (and why doesn’t he drop his camera and help). If these really are sequences outside the scope of the documentary, then the fourth wall is being breached. In either case, as with some other aspects of the film, we don’t feel enough realism to be entirely pulled in and there isn’t enough science-fiction flair to make us overlook the flaws.

There’s also the obvious problem faced by any filmmaker dealing with characters, real or fictional, who are suffering from boredom, which is depicting this state without inducing it. ALIEN OUTPOST allows its pace to lag in places where viewers really could use some acceleration.

Additionally, fans of actor Adrian Paul should note that, although he is top-billed on the film’s IMDB page and prominently mentioned in the publicity, in the release version, his performance is relegated to a voice-only phone call.

We can see what ALIEN OUTPOST wants to be as a movie – a science-fiction version of classic neo-realistic war films that isn’t defined by its budget. It gets part of the way there, but even though the performances are sound and some of the metaphors hold, we’re not engrossed enough by them to ignore the tangled story logic all around.