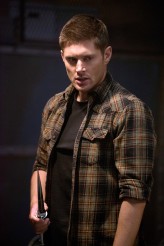 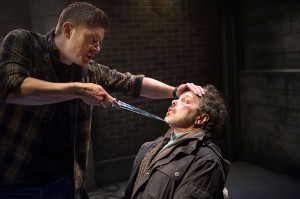 In the series’ January return, “The Hunter Games,” everyone is still grappling with their personal demons. Since the Mark of Cain has caused Dean to kill humans, including one or two who weren’t even killers (albeit they were relatively scummy), he really wants the supernatural whammy off of his body. Trouble is, Sam can’t find anything in the lore and Cass doesn’t know of anything that can help, except perhaps the Demon Tablet, but that’s missing.

However, Metatron (Curtis Armstrong), the rogue Scribe of God who temporarily took over Heaven, wrought havoc on Earth and killed Dean, remembers everything he wrote down. Castiel “borrows” Metatron from Heaven’s prison so that he can provide the spell to rid Dean of the Mark. Metatron thinks that Dean’s resurrection is hilarious and says that the First Blade must be used in any cure.

Metatron wants to play “Let’s Make a Deal,” but Dean would rather play Spanish Inquisition. Sam and Castiel manage to pulls Dean off of Metatron before the marked man beats and cuts the angel to death, but it’s clear that the Mark is very much having its way with Dean. Metatron provides only a single clue and is otherwise not inclined to help – to put it mildly – before Castiel must return him to the jail within Heaven.

Meanwhile, Castiel’s efforts to explain things to Claire (Kathryn Love Newton), the teenager indirectly left orphaned by the angel’s actions, have caused the girl to get fed up and run away. Castiel wants Dean to explain to Claire why Dean killed Claire’s ineffective “protector” who was about to pimp her out (though Claire doesn’t know this). Claire’s new “friends” offer to kill Dean for her, but when Dean shows up, Claire thinks better of it and warns him. Dean manages to stop himself from killing his assailants, Claire sort of forgives Castiel before taking off on her own, and Dean is left with a shaky sense of self-control.

Down in Hell, Crowley’s mother Rowena (Ruth Connell) continues her power grab, giving Crowley nightmares via a spell and killing another of his trusted servants.

Armstrong reminds us what a superb antagonist Metatron is, snarky and smarmy and full of toxic fury. We’re also worried for Dean, less about his restraint – he doesn’t exterminate Claire’s friends after all – than for his self-worth. The Winchester boys can feel guilt with the best of them, and the Mark seems to be confirming Dean’s worst suspicions about himself. This is not exactly unfamiliar turf for SUPERNATURAL, but as grounds for angst go, this is fairly solid. However, in what seems like a hurry to get through the scenes, Castiel is given some dialogue that sounds as though it was intended for Bobby Singer. The observations are correct, but they’re not the sorts of things Castiel currently says.

On the Hell front, Sheppard as Crowley is reliably enjoyable, but even a miscreant with no crossroads experience should be able to see how baldly Rowena is lying. Crowley’s mom is overdoing it and it seems like our usually astute ruler of the damned ought to be able to spot the attempts at manipulation. If indeed Crowley is on to Rowena, then this story thread is being teased out past its natural lifespan; if he’s really buying her act, then he’s becoming a very dumb demon.

“The Hunter Games” has suspense and a swell villain in Metatron, but it also demonstrates that too much time spent on hellish family values can erode the suspension of disbelief that’s necessary for SUPERNATURAL to stay aloft.

Article: TV Review: SUPERNATURAL – Season 10 – “The Things We Left Behind”