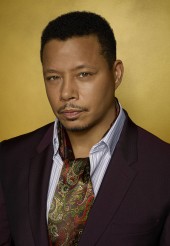 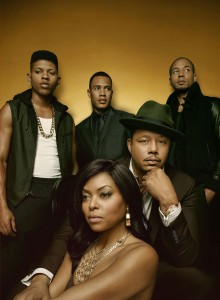 Fox’s freshman series EMPIRE, Wednesdays at 9 PM, is already a hit, renewed for a second season. Set in the world of hip-hop, it tells the story of ailing music mogul Lucious Lyon, played by Terrence Howard. Lucious wants to know that his legacy will continue after he passes and is trying to decide which of his three sons should inherit the company he created. Eldest son Andre (Trai Byers) has the best head for business, but no musical talent. Youngest son Hakeem (Bryshere Y. Gray) has gifts, but he often squanders them on drugs and pay-to-play women. Middle son Jamal (Jussee Smollett) would seem the ideal choice, except that he’s gay, something Lucious can’t bear. Adding to the complications – Lucious’ ex-wife Cookie (Taraji P. Henson), who’s been in jail for seventeen years, is now free and wants her own piece of the company.

EMPIRE creators Danny Strong and Lee Daniels had previously worked together on the feature film LEE DANIELS’ THE BUTLER, which Strong wrote and Butler directed (and which also featured actor Howard). Strong was already a multi-award-winning writer/producer on the strength of his HBO telefilms RECOUNT and GAME CHANGE; he also co-scripted the recent box office hit THE HUNGER GAMES: MOCKINGJAY PART 1. As an actor, the New York-born Strong has had recurring roles on BUFFY THE VAMPIRE SLAYER, THE GILMORE GIRLS, MAD MEN and JUSTIFIED.

At EMPIRE’s premiere party atop Hollywood’s W Hotel, Strong’s BUFFY cast mate Adam Busch and Jordan Kessler, one of Strong’s fellow executive producers on THE BUTLER, are there to support their friend’s new triumph.

Busch predicts that the advent of EMPIRE means that “The downbeat of history will start as we swim through a frank ocean of Shakespeare, politics and opera.”

“I couldn’t have said it better myself,” Kessler agrees.

Strong himself takes some time out to answer a few questions about his new EMPIRE.

AX: How did you come to create this? I mean, when you were working on THE BUTLER, did you or Lee Daniels say, “I want to do something about hip-hop”?

DANNY STRONG: No. What happened was, I was driving around L.A. and there was a news story on the radio about Puffy [Combs], and I remember thinking, “Wow, hip-hop is such a dynamic, exciting world, I should probably do something in the hip-hop world.” And then I immediately thought about KING LEAR and THE LION IN WINTER and I kind of came up with the whole idea for the show in, like, thirty seconds. But I thought of it as a movie. And then I called Lee and I said, “I have this idea,” and I pitched it to him, and he loved it. And he called me the next day, and he said, “I want to do it, but it’s a TV show, not a movie.” And I said, “You’re absolutely right,” and then we pursued it as a TV show.

AX: When you say KING LEAR is an inspiration, do you mean it’s about somebody who’s choosing the wrong kid to trust with the kingdom?

STRONG: No, a person who is dying who has an empire, who’s deciding which kid is going to take it over. That’s a KING LEAR story.

AX: Is Lucious dying of something that he can die of over many seasons?

STRONG: You’ll have to wait and see.

AX: So he could have some remissions?

STRONG: I can’t answer that. He has ALS, so it’s pretty severe.

AX: How did you come to cast Terrence Howard and Taraji P. Henson as your leads?

STRONG: Our first two choices, offered it to them and they both said yes.

AX: Do you think that was on the strength of the material, or wanting to work with you guys, or …?

STRONG: Both. I think it’s the material, wanting to work with Lee, and I think being excited about starring their own show.

AX: Both of them have said they feel EMPIRE is very dangerous and challenging. Do you feel it is?

STRONG: I think it’s challenging, I think it tackles provocative issues. You know, we deal with homophobia in the African-American community very head-on, homophobia in hip-hop, and I think some people might have a hard time with that.

AX: Do you think the people having a hard time with it will be people who are homophobic or gay rights activists?

STRONG: I think gay rights activists will love the show. I think the show has a very strong component of gay rights, and Jamal Lyon is a hero. He’s this wonderful character that you’re rooting for.

STRONG: No. I mean, it is, but then there’s hip-hop that has an R&B flavor to it. So it’s not so precise, the definition. To me, it’s less about the specificity of the music and more just the entire world of it – the clothes, the attitude, the lyrics, the demeanor. It just has a different vibe.

AX: How are you integrating the music into the show? Do you write in the scripts, “Okay, we need some music here,” or do you get a song and think, “Where should this go?”

STRONG: We normally write the script [with the note] “They’ll do a song here and it will be about this,” and then we send it off to Timbaland and he writes a song about that. And then sometimes, they’ve just written a song and then we hear it, and we’re like, “Oh, that’s great, let’s work it into the show.”

AX: This is your first TV series, as opposed to a feature film or a telefilm. Can you talk about how working on a TV series is different?

STRONG: It’s a lot faster, and arcing out a whole season is so much different than just doing one movie. It’s very challenging; it’s been fun. I spend a lot of time in the [writers’] room and I’ve written or co-written four of the twelve episodes and I’ve directed one of them. So I’ve been very involved.

AX: Is this your first directing experience?

STRONG: It was great. I loved it.

AX: Are you now looking to direct a feature?

STRONG: Yeah, exactly. Hopefully, we’ll get one made this year.

STRONG: That it is hot, that it rocks, that they need to see it. It’s the show of now.