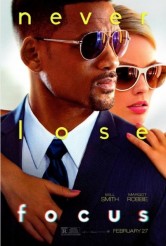 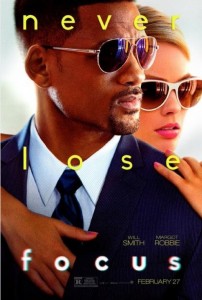 FOCUS begins in a way that primes us to expect one sort of movie, only to deliver another. Given that bait and switch and general con artistry is the business of its protagonist Nicky (Will Smith), this isn’t inappropriate, but it’s still somewhere between a little disconcerting and really disappointing, depending on how much one values certain elements.

There are plenty of plot twists in writers/directors Glenn Ficarra & John Requa’s story, starting with the meeting of Nicky and the stunningly beautiful Jess (Margot Robbie). Jess is an amateur con artist who wants to be Nicky’s apprentice – he lets her join his large crew for an operation they are running around the Super Bowl in New Orleans.

There are plenty of surprises and twists in this portion of FOCUS, and we also get a lesson in how thieves do certain things, which has real-life practical applications when it comes to self-protection. Nicky and his gang do a lot of wallet-snatching and identity theft. This is clearly meant to make them credible as modern criminals but, depending on one’s experiences, this may also make the characters into people we wouldn’t mind seeing beaten to pulps, if not outright killed.

This would work better if FOCUS were more morally and emotionally complex, but Nicky is presented as the sort of leading figure whose charm and brains are meant to outweigh his shortcomings. Nicky, as written and as played by Smith, is indeed alluring and intelligent, but even though the filmmakers have other characters say that their hero is also a jerk (they use another word), they don’t seem to really believe it. The result is a wee bit smug.

The second half of the film is set in the world of Formula One racing, where Nicky has been hired by a race car entrepreneur (Rodrigo Santoro), with an overbearing security chief (Gerard McRaney) to sabotage the other teams. The plot then revolves around an enormous coincidence. In most caper films, coincidences turn out to be the result of intricate plans revealed to the audience much later. In FOCUS, this isn’t the case – it’s a genuine coincidence, which makes it that harder to buy into a lot of other elements. The film does pack one truly awesome surprise that in conceals in plain sight until it’s ready to spring it, and it’s a superb piece of plotting, but it doesn’t make up for some of the lopsidedness that has already occurred.

Robbie rolls with all aspects of Jess, McRaney is wonderfully grouchy and Adrian Martinez and Brennan Brown are both very adroit as two of Nicky’s associates.

FOCUS is undeniably entertaining in most of its parts, but it’s not as clever as it tries to be. It lands somewhere in the middle of diverting and disappointing.