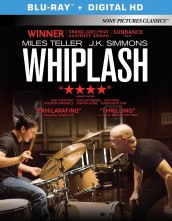 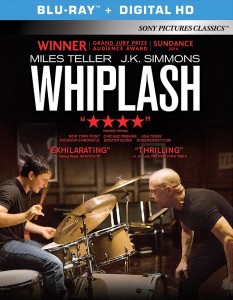 WHIPLASH – One of the first Best Picture films from the Oscars to come to video, this is the powerful tale of an up-and-coming drummer that gets drafted by a big league school for music to sit at the big boys table. Unfortunately, that comes at a price because the conductor is one hell of a son of a bitch. In the role that got him the Academy Award, J.K. Simmons delivers a masterful performance as a conductor that is trying to cement his own legacy while at the same time trying to find that special someone that will become a master musician. In doing so, he demands the utmost respect and playing ability from his students at the cost of slapping them, calling them pieces of sh** and other nasty things and throwing objects at them on a regular basis. This is at odds with Miles Teller’s character that has never been treated in such a way and it becomes the focal point of WHIPLASH. Teller’s character becomes obsessed with trying to please the conductor so much so he learns that others have killed themselves as a result. After a major confrontation on stage, one is kicked from the school and the conductor is fired but hey find themselves again and hook up for one last time that begins as a revenge scenario but quickly becomes both of the individuals finest moment. WHIPLASH is a very good, powerful movie with great performances and drama. Definitely recommend. 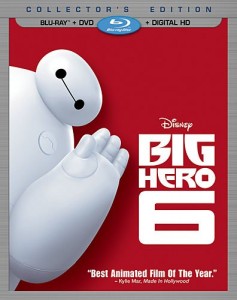 BIG HERO 6 – Disney sure knows how to deliver the goods. It seems lately they have a hard time not making something that will appeal to all ages. BIG HERO 6 definitely continues this trend with the very cool story of unlikely superheroes that must face a big bad guy with technology as his means of creating chaos in the world. A young boy is super intelligent and has a knack for building fighting robots. His brother is equally as smart and has built a robot that can be used to treat injured people. But when his brother dies, the younger brother takes the robot and crafts him into a fighting superhero along with the other students at the older brother’s laboratory. As impressive as the animation is in BIG HERO 6 it is matched by the coolness of the story and characters that have loads of personality. As with many of the animated films that have come out from Disney over the last few years – this one was created by the people who did WRECK-IT RALPH – this appeals to everyone and there are jokes in here that only adults will get but the story and characters will have the kids coming back for more. 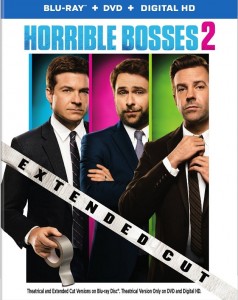 HORRIBLE BOSSES 2 – After the events of the first film, the trio of some of the biggest idiots moviedom has ever produced return for another bout of shenanigans and foolish behavior. Now, it should be said that there really aren’t many actual horrible bosses in this edition. Instead is more of a kidnapping caper gone horribly wrong. After the trio – Jason Bateman, Charlie Day and Jason Sudeikis – create a shower product designed to make showers easier, they get screwed over by an evil millionaire (played by Christoph Waltz) and his son (Chris Pine) who figure out a way to buy the company out from under them. So they devise a plan to kidnap the son and get a ransom to pay off their debt now owed. At last moment they back out but the son has other plans and convinces them to go through with the deal in order to get money from his dear old dad. But that goes to hell as well when he brings the police into the equation. Now HORRIBLE BOSSES 2 isn’t going to win any originality awards and at times their stupidity is infuriating, but overall it is fun and Jaime Foxx delivers a hell of a fun characters. Also returning to reprise their previous roles in the first film are Jennifer Aniston and Kevin Spacey. 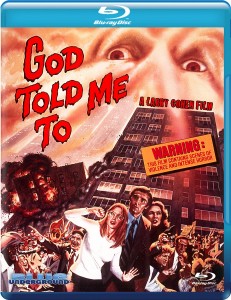 GOD TOLD ME TO – This is a strange duck and that’s putting it mildly. Considered a cult classic by some the story centers around the random killings of a bunch of people from a sniper in a water town in a populated city, to the killing of a wife and daughter, to random killings throughout the city. The only thing they have in common is that the killers said one phrase after doing the job … because GOD TOLD ME TO. From there, the film takes a bizarre turn going in one direction for a religious angle where a shiny dude has command over these people to do these terrible acts to a cop that learns he has some sort of powers that are similar in nature. At first, it appears biblical because both of them had virginal births but later we discover that something off-worldly may be at work here. It’s beyond strange and never really picks up any deeper message that can be made from the storyline. It pulls in so many directions that it is at times hard to follow still it is fairly unique in that nothing like this would ever be made today. Blue Underground has been doing a great job in bringing these cult and forgotten classics to Blu-ray and I’m sure some people out there are very excited to see this finally getting released.

NEW YEAR’S EVIL – As far as the salad days of the slasher flick go, NEW YEAR’S EVIL won’t be one that comes to mind when thinking about the best of the bunch. It can be filed in the mediocre category of the 80s serial killer flicks that populated the era. Still, if you haven’t seen it and are aching for a fix, this will do the job nicely. Plus, the fact that Scream Factory has rolled this out with a brand new digital cut of the film remastered to high definition it adds so much to the viewing pleasure of the flick. The skinny is that during a celebration to ring in the New Year, a New Wave show host keeps getting calls from a scary dude that says someone will be murdered. When people start showing up dead, the host takes the calls seriously and calls the cops and the search for the elusive killer goes on. This one has loads of cheese and unfortunately is not very scary including the antagonist that plays everything so over-the-top it ends up comical. Still, as stated above, it looks good (maybe for the first time ever) and it you need that killer fix, this will function well. 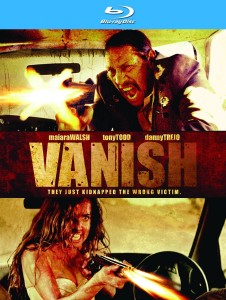 VANISH – VANISH is interesting in that it has some interesting, albeit not original, ideas going on. The problem is that the characters are so unbelievable and do such dumb stuff that it makes for hard watching at times. A group of ex-military vets kidnap the daughter of a drug lord (without some of them knowing it) and ransom her off. But the vets are far from stable themselves and frequently act oddly to each other and the woman. Now during the kidnapping the woman is far too calm and put together and at times there are weird moments where it appears that she may be in on the whole kidnapping thing but that never really comes to fruition and the moments we get where we think this end up being totally random and nonsensical. For the better part of the film it is a generic kidnapping story but later it gets more bloody as things go bad and it ends with a nonsensical battle between the drug lord and the vets and the woman who has a feeling the kingpin put down her mother because she was having an affair with one of the vets’ dad – all too convenient.