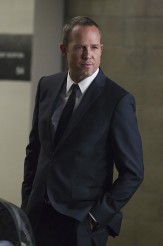 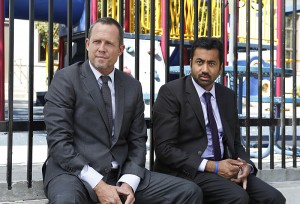 In CBS’s new series BATTLE CREEK, premiering Sunday, March 1 at 10 PM, the police department of the title Michigan town receives a boost in the form of newly-transferred FBI Special Agent Milton Chamberlain (Josh Duhamel). Almost everyone is thrilled by this – except for Milt’s new partner, Detective Russ Agnew (Dean Winters), who thinks Milt’s Boy Scout attitude is an act, or if it’s not, that Milt is crazy. Riding herd on this mismatched pair is Commander Guziewicz, the station chief portrayed by Janet McTeer.

McTeer, originally from Newcastle, England, has been nominated for two Oscars (for her lead performance in TUMBLEWEEDS and her supporting performance in ALBERT NOBBS) and one Emmy (for her portrayal of Clementine Churchill in INTO THE STORM). Other credits include THE WHITE QUEEN, DAMAGES, PARADE’S END, THE WOMAN IN BLACK, HANNAH ARENDT and the narrator of MALEFICENT.

During a short conversation with McTeer during CBS’s portion of the Television Critics Association press tour, Shore joins in to express his admiration of the actress.

AX: When and if you thought, “I’d like to do American television,” did you then think, “And I’d like to play a police chief”?

JANET McTEER: [laughs] No, I didn’t. It never occurred to me. I was here [in Los Angeles] and I got a phone call saying that “They’d love to meet you,” and they liked my work and I love their work, and we all had a bit of a love fest and then said, “Let’s work together” and they said, “Well, there isn’t a part in this. There’s a part that we could make into a woman – she’s supposed to be a guy, but we can make it into a woman for you if you want to do it,” and I went, “Okay.” So that was it, really.

McTEER: I had played one American before, yeah.

AX: Is the accent easy for you, or difficult?

DAVID SHORE: She’s doing a great job with it. I can’t tell you whether it’s easy or not – I can tell you it made Hugh [Laurie] the most miserable on HOUSE. [to McTeer] You seem more comfortable with it, actually.

SHORE: He did a fantastic, fantastic job, but he agonized over it.

McTEER: Yeah. One does agonize.

AX: Did either of you have to do anything to accommodate the change in concept when the character was changed from a man to a woman?

SHORE: It was a man. There weren’t a lot of women in the original script, and I just one day said, “Why is this a man? There’s no reason for this to be a man.” And I started thinking, “It’s actually more interesting as a woman.” And I think you were the first person we met with about it, even. So it happened very nicely and very quickly. I find the character much more interesting.

AX: Did you know each other’s work before this?

AX: Have you done any research into being a police commander?

McTEER: Actually, I have. I’ve read as much as I can on the Internet.

AX: And what was the most interesting thing you’ve learned?

McTEER: Something that the commander of the New York Police Department said. She said, “You go to work and you don’t mind if you’re a woman or a man. You just do your job.”